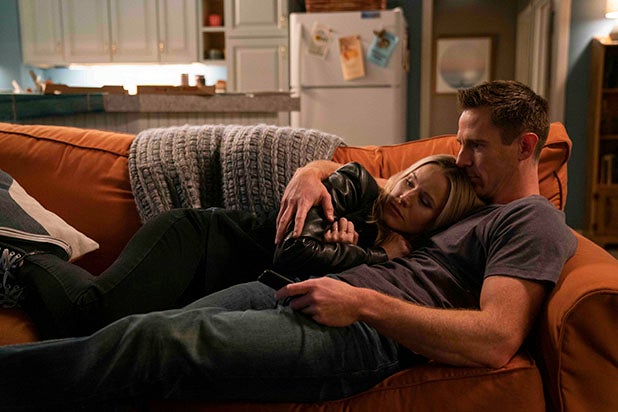 Marshmallow madness is in full swing as we approach the premiere date for Hulu’s “Veronica Mars” revival.

Kristen Bell is returning to sunny Neptune, California for eight more episodes of the little series that could, re-inhabiting the role she first played nearly 15 years ago. She’s joined by series creator Rob Thomas, much of the show’s original cast and a few new faces for what promises to be a “darker” new mystery involving a serial bomber, class warfare and J.K. Simmons.

1. Bell and Thomas aren’t the only familiar faces returning to Neptune

Former recurring star Max Greenfield is also reprising his “Veronica Mars” role. He will be returning as Leo D’Amato, who was new sheriff’s deputy on the OG series, and a detective at the San Diego Police Department in the 2014 film, who helped Veronica in the Susan Knight murder investigation. And Ken Marino is coming back as sleuth Vinnie Van Lowe for three episodes.

Hulu will debut all eight episodes of the revival on Friday, July 26.

Here’s the official logline for the revival: Spring breakers are getting murdered in Neptune, thereby decimating the seaside town’s lifeblood tourist industry. After Mars Investigations is hired by the parents of one of the victims to find their son’s killer, Veronica is drawn into an epic eight-episode mystery that pits the enclave’s wealthy elites, who would rather put an end to the month-long bacchanalia, against a working class that relies on the cash influx that comes with being the West Coast’s answer to Daytona Beach.

4. Some new residents are coming to town

Patton Oswalt has signed on to recur as new character Penn Epner. Penn is on the wrong side of 40 for “best pizza delivery guy in Neptune” to be his claim to fame, but the dude won’t shut up about it. He barely shuts up at all. Pizza delivery is his job, but his passion is “true crime.” He is a frequent poster on unsolved murder websites. Penn is affable and a bit hapless, and he’s going to milk his 15 minutes for all they’re worth.

Bell’s “The Good Place” co-star Kirby Howell-Baptiste will play Nicole, the owner of a Neptune nightclub popular with spring breakers. When the spring breakers start turning up dead, though, Veronica suspects that the killer is using the club as a source of fresh victims. “A Different World” star Dawnn Lewis will take on the part of Marcia Langdon, the new police chief (since Neptune has incorporated).

J.K. Simmons has also been added to the newbie lineup as Clyde Prickett, an ex-con who served 10 years for racketeering, and was smart enough to be the first guy in Chino to offer protection to Neptune’s richest real estate developer, Big Dick Casablancas, on Big Dick’s first day in prison. Now a free man, Clyde works as Big Dick’s fixer. He’s the smarter and more dangerous of the pair and has a network of fellow ex-cons he can count on to keep his own hands clean.

5. If you didn’t watch the original series, Hulu’s got you

As part of the revival deal, Hulu has the streaming rights to all past episodes of the original “Veronica Mars.”

The first three seasons will be made available on the platform beginning July 1. Currently, the 2014 Kickstarter-funded feature film can be streamed at HBO.

Bell starred as the titular spy character on the series, which followed a California teen sleuth and student who led a second life as a private investigator under the guidance of her detective father (Colantoni). “Veronica Mars” debuted in 2004 and ran for two seasons on UPN before jumping to The CW for one season before getting canceled.

6. How those follow-up books — and the movie — play into all this

After the flick, Thomas wrote two “Mars” novels: “The Thousand-Dollar Tan Line” and “Mr. Kiss and Tell.” Though the plot for the revival is very similar to “Tan Line,” Thomas clarified on Twitter last month that it’s not exactly the story we’ll follow in the revival.

“Like THE THOUSAND DOLLAR TAN LINE, the mini-series will be set against a Spring Break backdrop, but TDTL is NOT the story we’re telling,” Thomas wrote. “We’re five years after the movie. Books are 98% canon. Pony is included. Marcia Langdon is police chief. Spoiler: Neptune finally incorporated.”

Like THE THOUSAND DOLLAR TAN LINE, the mini-series will be set against a Spring Break backdrop, but TDTL is NOT the story we're telling. We're five years after the movie. Books are 98% canon. Pony is included. Marcia Langdon is police chief. Spoiler: Neptune finally incorporated.

“It’s gonna be a much darker world,” Bell said when she appeared on SiriusXM’s Entertainment Weekly Radio last month. “It’s going to be a bigger world. It’s definitely not going to be what we did on UPN or The CW. So I want to brace fans for that, that it’s going to be darker and bigger and more cinematic and definitely a little bit different.”

8. This also might not be the last we see of Ms. Mars

During the Television Critics Association press tour Monday, TheWrap spoke with Hulu’s Senior Vice President of Originals, Craig Erwich, and asked him about the possibility of a second season. And yes, they are interested.

“We’d be totally open to that,” Erwich told TheWrap. “We’ve ordered eight episodes,” he said, adding that the revival has “a proper, satisfactory narrative ending.” However, Erwich said, should creator Rob Thomas and “the creative come together for Season 2 and should people like it as much as we like it, totally open to that.”