Viacom stock may be as volatile as its executive team at the moment, but that’s not entirely a bad thing for investors.

Viacom shares finished the prior week at $39.05 apiece. All hell broke loose a few hours later among top management, as Chairman Emeritus Sumner Redstone removed company Chairman, President and CEO Philippe Dauman from the seven-person family trust that holds an 80 percent stake in both Viacom and CBS.

Since then, the in-fighting between Dauman/Viacom and the Redstone family has been nearly constant — and increasingly nasty.

Beyond unkind allegations traded through the press — mostly between Sumner’s daughter Shari Redstone and his French protege — Dauman and the also-ousted George Abrams filed a lawsuit on Monday morning challenging the decision to remove them as family trustees.

It’s been a wild ride for Viacom stockholders — and not an enjoyable one for the past 22 months as the share price has slipped to less than half of its level in July 2014 when the stock traded as high as $89.76. Read about VIAB’s recent stock history here. 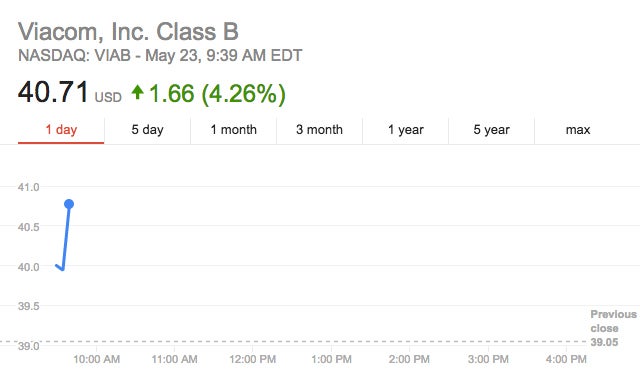