The real-life Viacom soap opera currently playing out before our eyes is probably better than any drama across its cable channels’ airwaves — but shareholders are unlikely entertained.

On Friday night, Viacom Chairman Emeritus Sumner Redstone shockingly removed Viacom President, Chairman and CEO Philippe Dauman (pictured above) from the seven-person trust that controls the fate of both that company and CBS in the event of the 92-year-old Redstone’s death or declaration of incapacity. The Redstone Family’s private National Amusements serves as parent company to both public firms.

Dauman didn’t take the face-slap lying down, firing back: “These steps are invalid and illegal. They are a shameful effort by Shari Redstone to seize control by unlawfully using‎ her ailing father Sumner Redstone’s name and signature. As she knows and as court proceedings and other facts have demonstrated, Sumner Redstone now lacks the capacity to have taken these steps. Sumner Redstone would never have summarily dismissed Philippe Dauman and George Abrams, his trusted friends and advisors for decades.”

This battle for control between Shari Redstone and Dauman has been a dark cloud hanging over the head of Viacom, as has Sumner Redstone’s embarrassing legal battle with ex-companion Manuela Herzer. All the while, company performance has been similarly suffering — in terms of TV ratings, keeping key personnel, and yes, stock price.

That aforementioned July 2014 high fallong to the February 2016 low represents a massive 66.5 percent stock price decline. Even with the better March, April and May months, shares are still down a whopping 56.5 percent over 22 months.

And since late June 2014 — the last month before the share price roller-coaster tipped over its peak — the stock has been downgraded by Citigroup, Barrington Research, Deutsche Bank, Goldman, Wells Fargo and BTIG.

Below is a look at Viacom’s full stock history, since it spun-off from CBS in 2005. You can see the steady growth following the financial crisis almost a decade ago — right up until July of 2014, that is, when fortunes peaked and started to reverse.

Also Read: Move Over Les Moonves: Which Media Mogul Got the Biggest Pay Raise Last Year - And Who Slipped 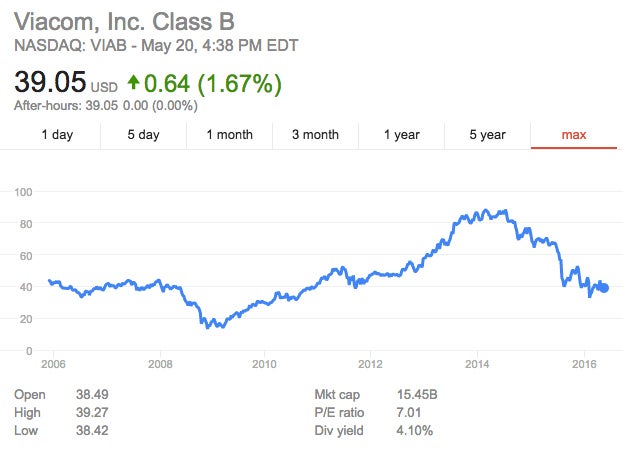