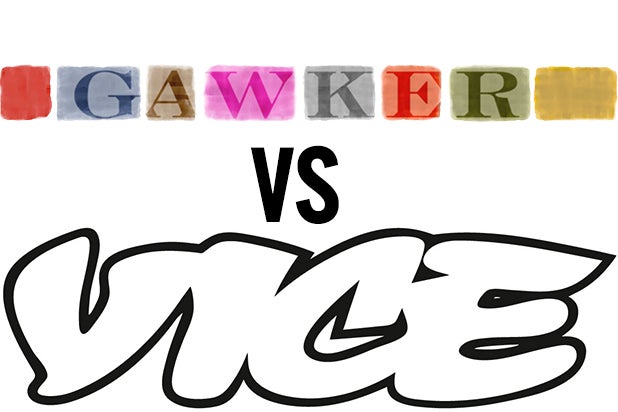 Vice and Gawker both do journalism in new and unconventional ways: Vice loves immersive pieces that expose its followers to fresh truths by seeking out the most dangerous spots on the globe. Gawker says the things no one else will say, printing often-unsourced rumors in keeping with its credo that “Today’s gossip is tomorrow’s news.”

Would you be shocked to learn they don’t get along?

Though they share tastes in tell-us-how-you-really-feel headlines and Brooklynite fashion (doesn’t everyone?) Vice lashed out at Gawker Friday, calling it a site that “openly traffics in rumor, innuendo, and in many cases straight-up bullshit.” Vice was en-vicened  by a Gawker item about its job posting for a freelance copy editor for its new Vice News website.

“We hear Vice’s pay for staffers is absolutely terrible,” said the post, by Hamilton Nolan.

That led Vice to note that Gawker’s founder, Nick Denton, has been sued by former interns who claim he violated federal wage laws. And to list some of the benefits of working at Vice:

“In addition to this compensation package,” Vice continued, “all Vice employees who meet a length-of-service criterion of two years are automatically enrolled in the company’s Stock Appreciation Rights (SAR) program, a stock-based compensation plan whereby employees receive payments based on the value of VICE stock in a liquidity event. The VICE SAR program was launched in late 2013, with long-term employees grandfathered into the program and granted SAR options that recognized their dedication and excellence for the early growth years of the company. As VICE rises in value, so do the value of the SARs, and all employees in the program benefit. This is, of course, 100 percent contrary to Gawker’s assertion in their smear job. But then again, since when did Gawker actually care about the truth?”

We’re sure Gawker will have a pithy reply soon. Why don’t you two just merge, already? You’re both beautiful.

For the record: A previous version of this story misquoted Hamilton Nolan. TheWrap regrets the error.