The latest familiar property to get the origin story/preboot/prequel treatment isn’t as soul-crushing as, say, “Pan,” but the movie feels as stitched together as one of the title character’s monsters, flirting with horror, action, comedy and even romance but committing to nothing but loud messiness.

Early on, you get occasional glimpses at the successful movie that director Paul McGuigan (“Lucky Number Slevin”) and writer Max Landis (“American Ultra”) might have crafted from this material, but ultimately you’re left with a chaotic mess, one where characters, and narration, disappear and reappear without warning, and the explosions figuratively obliterate the leads as much as they literally obliterate the extras.

In keeping with reboot logic, where audiences are assumed to care about legendary characters only if they’re young and hot, Daniel Radcliffe stars as Igor — although, when we first meet him, he’s got no name at all, living in chains as a circus hunchback. Sensing the sad clown’s intelligence and humanity, medical student Victor Frankenstein (James McAvoy) frees him and helps him escape, with the help of various science tricks.

Frankenstein drains the young man’s enormous abcess (turns out he wasn’t a hunchback after all), straps him into a back brace that allows him to walk erect, and gives him the name of his long-missing, drug-addicted roommate.

Igor is grateful for the opportunity to live away from the circus, and to devour Victor’s medical texts, and soon the two are partnering on Victor’s experiments to reverse death. 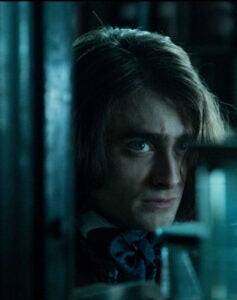 Meanwhile, Turpin (Andrew Scott, “Spectre”) of Scotland Yard suspects that Frankenstein is the man responsible for the circus escape (which left one man dead, through no fault of Victor or Igor) and for the theft of various animal body parts from the zoo. The closer Turpin gets to Frankenstein’s lab, the twitchier he gets about the young scientist violating the natural order. (Turpin and Frankenstein get into various Christianity-versus-rationality arguments, but they’re both so neurotic that neither side comes out sounding all that great.)

Igor, who’s falling in love with his onetime circus comrade Lorelei (Jessica Brown Findlay, “Downton Abbey”) starts having second thoughts, but by that time, Victor is already getting funding from rich rotter classmate Finnegan (Freddie Fox, “Banana”), whose ultimate goal is to steal Victor’s technology for his wealthy family to exploit. Then comes the lightning, the sparks, the fights against railings and the goes-to-11 score by Craig Armstrong (“Far From the Madding Crowd”).

McAvoy plays Frankenstein as a gleeful, wide-eyed madman in a performance that would go perfectly with a send-up of the material. (“Also, a flat head.” “Why?” “Because I LIKE IT!”) Of course, someone else already made a pretty perfect parody of this story several decades ago, and memories of “Young Frankenstein” seep into even the most serious moments here. When a character loses his hand and gets a wooden one, for example, it’s hard not to think of the similar prosthetic of Kenneth Mars’ Inspector Kemp.

In the early scenes, I had hoped Radcliffe’s hunchback might be another one of his gentle-monster characters, as in the underrated “Horns”; with his whiteface makeup and mop of unruly hair, he resembles Elijah Wood auditioning for “Godspell” or a remake of the truly bizarre Marcel Marceau vehicle “Shanks.” (That latter movie, incidentally, gets lots more mileage out of its tweaks to the Frankenstein legend.)

But once Igor gets cleaned up and starts walking upright — his spine correction takes all of about five minutes — he’s stuck as the movie’s straight man, the dull voice of reason opposite Frankenstein’s manic ravings. Radcliffe does what he can with the role, but there’s not much in it for him to sink his teeth into.

The cinematography by Fabian Wagner is murky and muddy, the better to cover up the aggressively CGI’d period London, which seems to be one part steampunk to 49 parts dung and soot. Say what you will about Guy Ritchie‘s “Sherlock Holmes” movies, but they at least fake the setting effectively enough that you’re not thinking about green screens every time a character leaves the house.

Perhaps the worst sin of “Victor Frankenstein” is its need to give its antihero a motivation for his experimentation, a common and increasingly irritating feature of these origin-story movies. The results read like something from a freshman creative-writing class homework assignment (for Monday: Describe a childhood incident that might explain Victor’s desire to bring the dead back to life) that’s thuddingly prosaic and completely unnecessary.

Whether or not one should tamper in God’s domain remains a matter of opinion, but “Victor Frankenstein” provides evidence that mere mortals should not mess with what Ms. Shelley hath wrought.