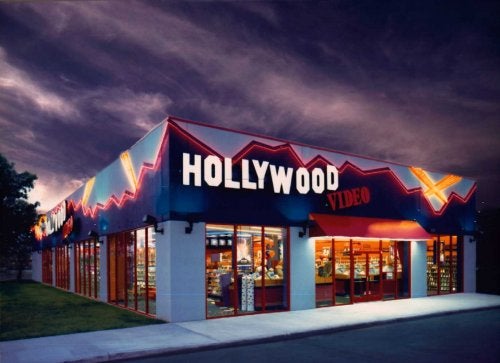 And then there was one.

After filing for bankruptcy for a second time last February, Movie Gallery, the country’s second largest rental chain, has announced that it will close its remaining 2,415 U.S. stores and liquidate its holdings.

Movie Gallery owns the Game Crazy and Hollywood Video brands. It was not immediately apparent if the company would also close the over 180 stores it operates in Canada.

More than 15,000 people will likely lose their jobs as a result, it said over the weekend.

Founded in 1985 by a pair of Alabama businessmen, Joe Malugen and Harrison Parrish, Movie Gallery began franchising rapidly throughout the south and Florida panhandle. It went public in 1994. In 2005, Movie Gallery snapped up its larger competitor Hollywood Video to help that chain avoid a hostile takeover attempt by Blockbuster.

Yet integrating the brands and the $380 million in debt Movie Gallery assumed as part of the purchase led to major problems down the road.

Though it ranked as second only to Blockbuster among rental chains, the last few years have been particularly trying for the Oregon-based chain, which at one point owned some 4,700 stores with revenue in excess of $2.5 billion.

As the video rental business migrated to subscription services such as Netflix and kiosk operators like Redbox, Movie Gallery closed hundreds of underperforming stores, saw its stock price fall precipitously, and underwent the first of two restructurings designed to help the chain renegotiate with lenders and landlords.

When Movie Gallery filed for bankruptcy protection last February, the company announced that it planned to shutter an additional 800 stores. It also cited liabilities in excess of $540 million as part of that Chapter 11 filing.

Blockbuster shares rose on the news Monday. That victory could be short lived, however, as the chain is also laboring under the weight of hundreds of millions of dollars in debt and a rapidly altered movie rental landscape.