Ivo van Hove wastes no time getting right to the incest theme in his Young Vic staging of “A View from the Bridge,” which opened Thursday at Broadway’s Lyceum Theatre.

Most directors wait a few minutes into the Arthur Miller drama before telegraphing Eddie Carbone’s sexual desire for his niece, Catherine. (It happens when she lights his big cigar.) Van Hove is not most directors. His Catherine (Phoebe Fox) jumps up on Eddie (Mark Strong) the moment he arrives home, wrapping her legs around his waist to hug him.

This posture is later repeated when Catherine loses her virginity to Rodolpho (Russell Tovey), one of the Sicilian immigrants Eddie and his wife, Beatrice (Nicola Walker), have offered refuge from the immigration authorities.

More surprising is how fast van Hove introduces the play’s homosexual theme, which explodes in the second act (this production is performed without intermission) when Eddie kisses Rodolpho moments after Rodolpho and Catherine have had sex. Throughout the play, Eddie has been accusing Rodolpho of being homosexual.

His accusations say more about his own sexual orientation than Rodolpho’s, and van Hove makes that clear from the moment the play begins: The pressure-cooker box set by Jan Versweyveld rises slowly to expose two men, Eddie and a coworker (Richard Hansell), nearly naked and completely enveloped in steam as they clean up after a hard day at the shipping yard in Brooklyn. For the next two hours, van Hove and his excellent cast take the lid off Eddie’s obsessions and inhibitions, ending in a literal blood bath.

Van Hove is highly dramatic, but he isn’t always very subtle. Some of the performances, though, are both. Strong turns Eddie’s tragedy into an utter inability and unwillingness to understand his own motives, even when he turns Rodolpho and his friend Marco (Michael Zegan) over to the immigration authorities to have them deported back to Sicily.

Also Read: 'On Your Feet!' Broadway Review: Emilio and Gloria Estefan Pay Tribute to Their Own Success 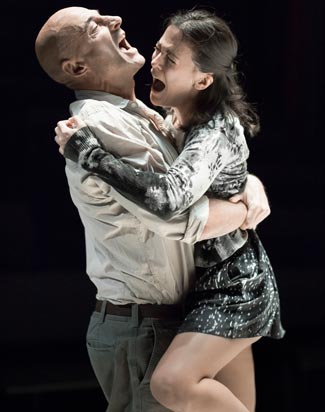 As with most van Hove stagings, props are eschewed (except for Eddie’s cigar and Catherine’s equally sexy high heels), and when Eddie makes his call to the authorities without an actual phone in hand, it becomes a cry to this man’s own conscience or, perhaps, his God.

In the much less showy role of Eddie’s wife, Walker offers a devastating portrait of a woman isolated by her awareness of what drives her husband. Too often, Beatrice becomes a pathetic character. Walker imbues her with genuine dignity throughout.

Van Hove offers such a distinctive interpretation that he mutes some aspects of the play. Tovey plays Rodolpho as a Billy Budd without the stutter. He’s pure and good, which makes Eddie into something of a Claggart, tormented by his own attraction to the young man.

Tellingly, Miller’s play offers several Melville-like references to how much Rodolpho’s coworkers in the shipping yard, like Budd’s shipmates, enjoy his company. But much less explored here than in more conventional productions is any suggestion that Eddie could be right: Rodolpho might be gay and he might be marrying Catherine just to secure his American citizenship. Tovey’s take on the character suggests neither, except that his body has been pumped to action-hero proportions.

This “Bridge” marks van Hove’s Broadway debut. Previously, New York theatergoers had to content themselves with his occasional stagings at BAM and New York Theatre Workshop. It’s great to have his adventurous work exposed to a much larger audience in the commercial theater, and better yet, he returns for his sophomore effort on Broadway in only five months with his production of another Miller classic, “The Crucible.”