The women of “The View” spent most of Monday’s show discussing the fallout from the recent leak of a Supreme Court opinion draft, in which Justice Alito pushes for Roe v. Wade to be overturned. In the days following the leak, many have worried what will happen to women if abortions are banned, especially in places like Louisiana, which recently introduced legislation that would allow prosecutors to charge and possibly convict a woman of homicide for having an abortion.

If criminal charges are on the table, Haines feels men should face the same prospect.

“When I hear people talk about this, I want to know now, when we say ‘What could happen next?’ is, how are we going to indict the men?” Haines said. “Because every abortion starts with a male orgasm.” 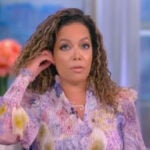 Haines added that many women have been forced into having abortions by men, citing Rita Moreno as an example. Moreno revealed in her 2021 documentary that Brando forced her to get an abortion after becoming pregnant with his child.

“We know, since the beginning of time, that many women are pressured into this do to men as well,” Haines said. “So are we talking aiding and abetting, are we talking accessory? Like, what are we talking? Because if women are gonna go down, the men that did this to them are going down, too.”