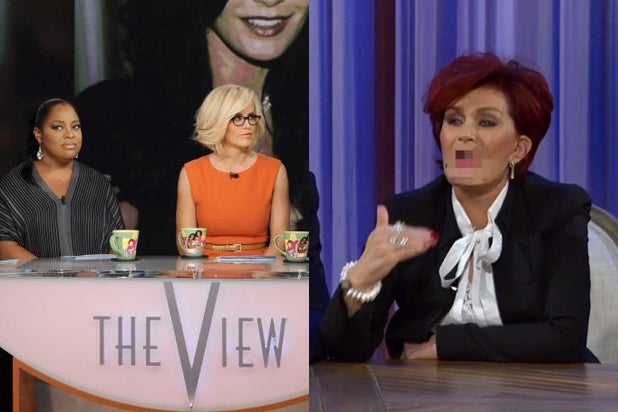 “View” hosts Sherri Shepherd and Jenny McCarthy responded to “Talk” host Sharon Osbourne’s request that they “go fuck themselves” with less profanity and more tact than Ozzy’s wife showed them.

McCarthy told “Entertainment Tonight” that she “love[s] Sharon,” adding: “Sharon and I’ve been friends a very long time. She sent me roses two weeks ago, so who knows what her intentions were, but I love [Sharon] and I love ‘The Talk.'”

Shepherd, meanwhile, responded to a detractor who tweeted that she was “the most racist, non comical, non Christian blob of bitternes [sic]” and “The View” was “Less entertaining because of her” by tweeting “well… ma’am it’s your opinion… there’s always Sharon Osbourne.”

Also read: Barbara Walters on Jenny McCarthy: ‘I Think the Criticism About Her Was Unfair’

On Wednesday, Osbourne told viewers of “The Arsenio Hall Show”: “Barbara — idolize her, divine, she is super-human. I love Barbara Walters. The rest can go fuck themselves!””

A spokeswoman for “The View” told TheWrap on Wednesday that the show had no comment on Osbourne’s remarks.