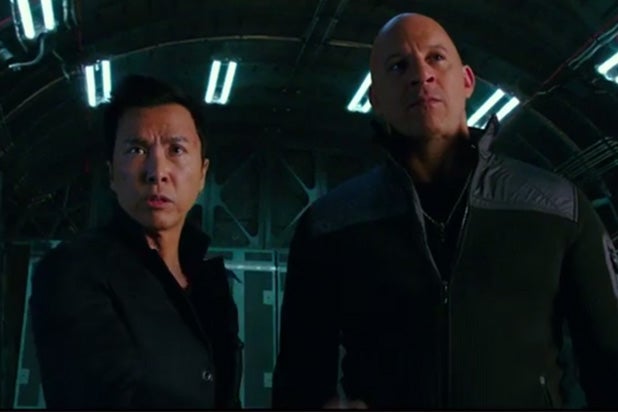 “This has China written all over it,” Crawley told TheWrap.

“We have high hopes that they saw in this movie a movie that can do really well there,” Crawley said. “I feel they treated us so kindly by giving us that date.”

Crawley said Paramount is trying to take advantage of the flurry of activity in the country around the holiday, particularly the hundreds of millions of people who are expected to travel around China.

“We’re trying to make sure we’re in train stations and airports,” Crawley said. “We have digital and online content. Also, and most important to me: Let’s make sure our trailer is up with many of these great local movies and seen by as many of the cinema-going audience as possible.”

However, one important local market indicator could dampen some of the optimism surrounding “xXx’s” box office potential: online presales.

Jonathan Papish, an industry analyst at China Film Insider, says the film is starting to get a healthy amount of buzz and could comfortably land in the $100 million to $150 million range, but said there’s nothing in the presales data that would indicate anything like the “Furious 7” windfall.

To compare, “Warcraft,” which made $221 million in China, had $3 million in presales more than a week out from its opening.

Some of that slow start is likely due to Chinese New Year hangover, but Paramount has also yet to fully unleash Diesel and crew on the Chinese market, where he’s a megastar best known for playing Dom Toretto in the “Fast and Furious” movies. Diesel and the rest of the film’s headliners will travel to Beijing next week for press events and fan screenings.

“Vin has a massive following in China,” Crawley said. “What Vin has done with the ‘Fast and Furious’ franchise is phenomenal. He’s such a leader and spokesperson for that franchise. We know he was equally excited to bring Xander Cage back to the big screen. Of course, it’s reminiscent of some of the ‘Fast and Furious’ material.”

“‘xXx’s’ official Weibo is the most active I’ve ever seen for a Hollywood movie,” Papish said. “They formed the account all the way back in November 2015 and have been posting content nearly ten times per day for a few months. That said, they’ve only racked up 31,000 followers in all that time.”

Diesel’s co-stars Yen and Wu should help expand the film’s audience by tapping into their devoted local fan bases. But Yen’s role in “Rogue One: A Star Wars Story” couldn’t singlehandedly save the film at the Chinese box office: it sputtered, making just $62 million there. Crawley thinks Diesel and the film’s female stars, including Dobrev, who has a significant following in China, should mitigate that.

“Where China has an emotional connection to ‘Transformers,’ it doesn’t seem they have quite a connection to the ‘Star Wars’ franchise,” Crawley said. “Our movie — because of Vin, because of Kris, because of our actresses — we find ways to connect with different audiences.”

Paramount can also count on a secret weapon beyond Diesel and Yen, marketing partner (and new slate financier) Huahua Media. Huahua’s marketing expertise, which included original songs and TV tie-ins, helped propel previous Paramount films like “Transformers: Age of Extinction” — which had the biggest-ever box office gross for a Hollywood movie in China when it premiered in 2014 — to banner performances in the Middle Kingdom. Paramount and Huahua are revisiting some of the same tactics this time around, and focusing on the third- and fourth-tier cities well beyond Beijing and Shanghai that can often determine whether a movie succeeds or flops in China.

“We know music helps, hence we had Kris Wu record a track called ‘Juice,'” Crawley said. “We shot the music video here in L.A. and Vin’s in the video.”

Papish said Paramount was smart to bring in Huahua and focus on the third and fourth-tier cities, but he would be surprised if “xXx’s” box office comes close to “Age of Extinction.” That’s not entirely the movie’s fault — China’s box office slowed down last year after years of double-digit growth, up just 4 percent in local currency and actually down year-over-year when converted to dollars, as reduced online ticket subsidies took a toll.

“Don’t get me wrong, this film is still going to be a surprising success at the box office, and I think Paramount was right to partner with Huahua to target lower-tiered cities, but $300 million plus?” Papish said. “Come on!”

But word of mouth can push a film to a surprising performance in China, even when presales don’t indicate an opening-weekend bonanza. “Zootopia” took advantage of that, especially in lower-tier cities, and the film made more in its second and third weeks than it did during its opening seven days on its way to $236 million at the Chinese box office, making the animated hit the second-highest grossing film of the year there. And with popular, social media-savvy stars like Diesel, Yen and Wu, “xXx” is well positioned to generate plenty of buzz — maybe enough to stay in China’s theaters long enough to threaten some of its biggest-ever Hollywood imports.

“It’s the word of mouth that will bring you in and keep you on screen,” Crawley said. “You have to open big and you have to stay strong day-by-day. Or the powers that be will start dropping you off screen.”

Chinese moviegoers love to spend their hard-earned yuan on Hollywood blockbusters like "Captain America: Civil War," "Avatar" and "Star Wars: The Force Awakens." Comedies and dramas? Not so much. Read on to see which American hits have raked in the most money (according to BoxOfficeMojo) in that nation across the Pacific.