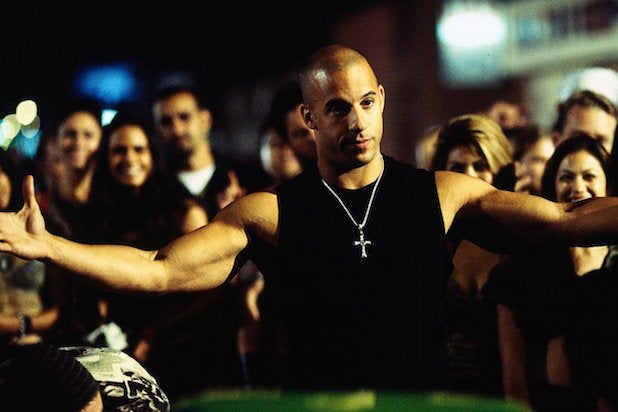 What is Vin Diesel doing with his time in quarantine and in between the release of “F9” next year? Would you have guessed record a clubby pop song with Kygo?

So yeah, Dom Toretto has a music career now. And in a really unexpected twist of 2020 pandemic life, the “Fast & Furious” star’s new track actually premiered as part of Kelly Clarkson’s talk show, spawning an unintentionally hilarious video of a crowd full of people on video screens dancing to Diesel’s new banger.

That perplexing sight of a “Guess Who” board of shuffling flat screens has been circling the web on Friday morning just waiting to become a meme, complete with Internet savvy people swapping out Diesel’s song for their track of choice.

But with respect to Diesel and the people who are really feeling it, the song is called “Feel Like I Do,” and it was written and produced by Petey Martin, with Kygo releasing the track on his label Palm Tree Records.

Diesel also recording a brief video message for Clarkson about how the song came about.

“I am so honored to be able to debut my music on your show because since you first won ‘Idol’ and until today have somehow maintained your authenticity,” Diesel said. “I am blessed that on a year that I would normally be on a movie set, as you know that’s not possible, I have another creative outlet. Another way to share with you my heart.”

Of course, Diesel stans will defend the actor’s singing chops with this karaoke video of him singing Rihanna’s “Stay,” as well as that time he honored the late Paul Walker by singing “See You Again” at the 2015 MTV Movie Awards.

But if you did in fact predict that 2020 would produce a year in which Diesel would actually go from action star to pop star we have to hear incessantly on Top 40 radio, could you please also tell us how the election will shake out?

Check out some Twitter reaction to Diesel’s “Feel Like I Do” below. Listen to the song now through Spotify.

Idk man but that vin diesel song tho pic.twitter.com/ASrVTUGWTK

I didn't know what to expect Vin Diesel's music to sound like, but somehow it was exactly this. It was ALWAYS this. https://t.co/zeqqoWH4Qj

So…how long before someone releases a Guardians of the Galaxy-themed parody of Vin Diesel's new single called "Feels Like I'm #Groot"?https://t.co/iW0bWbtIl4 pic.twitter.com/qEgQ2RNJxy

when the new Vin Diesel track comes on the radio pic.twitter.com/qwz7cXF48W

LIVING for this new Vin Diesel track! Thanks for having me @kellyclarkson!! pic.twitter.com/OW4NyiSMZH