Vin Scully, the velvet-tongued sports broadcaster known to generations of baseball fans as the voice of the Los Angeles Dodgers, has died, the team announced Tuesday. He was 94.

Scully’s mark on Los Angeles, baseball and broadcasting history will never be matched. To say he was beloved is a colossal understatement — while most baseball fans could scarcely name a close rival’s play-by-play man, every decent baseball fan gets wistful at the mere mention of Scully.

“He was the voice of the Dodgers, and so much more,” the team wrote. “He was their conscience, their poet laureate, capturing their beauty and chronicling their glory from Jackie Robinson to Sandy Koufax, Kirk Gibson to Clayton Kershaw.” 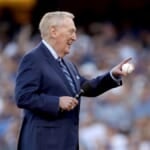 Scully’s longevity is almost hard to process. He began calling Dodgers games in 1950, when the team was still in Brooklyn. Without interruption, he made it all the way to 2016, downshifting to a limited schedule in his final year — long after most broadcasters would have hung up the microphone.

But perhaps most satisfyingly, Scully went the distance never having lost the gleaming edge of his wit wisdom.

Scully’s accomplishments behind the microphone are not even half the story.

“He was a giant of a man, not only as a broadcaster, but as a humanitarian,” Dodgers CEO and President Stan Kasten said. “He loved people. He loved life. He loved baseball and the Dodgers. And he loved his family. His voice will always be heard and etched in all of our minds forever. I know he was looking forward to joining the love of his life, Sandi. Our thoughts and prayers go out to his family during this very difficult time. Vin will be truly missed.”

In recorded global sports history, Scully’s was the longest-tenured of any broadcaster with one team, period. Longtime Dodgers manager Tommy Lasorda has Scully beat in one category: years associated with the franchise (by two). 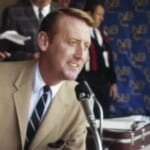 Also Read:
Goodbye, Vin Scully: In a Format Designed for Play by Play, He Found Poetry

Not one for gimmicky exclamations or over-the-top homerism, Scully instead inhabited a lyrical, intellectual zone of sports broadcasting that was all his own, giving fans an honest, cerebral insight into the game, and team, they loved. Scully’s Dodger-blue cred was unimpeachable, but he never shied from critiquing his own team’s play and players; his umpire-like objectivity only contributed to his legendary status.

“It’s time for Dodger baseball! Hi, everybody, and a very pleasant good (afternoon/evening) to you, wherever you may be,” was his signature intro.

Scully also called football and golf for CBS from 1975 to 1982, and was called up to NBC Sports’ lead baseball play-by-play from 1983 to 1989. He was also CBS Radio’s World Series announcer from 1979 to 1982, and from 1990 to 1997. It wasn’t always rosy; competition for plum assignments at the national-broadcast level was a source of irritation for Scully, who wasn’t afraid to make known his displeasure with the various sharing arrangements and network politics.

Scully grew up in the ’30s near the Polo Grounds of the New York Giants; he was born in the Bronx, and raised in the Washington Heights neighborhood of Manhattan by working-class Irish parents. His father died when he was 4, and his mother remarried an English merchant sailor he would come to call his father. As a youth, he sold beer, delivered mail and cleaned hotel silver for money.

Scully faced his share of personal tragedy and heartbreak. In 1972, Joan Crawford, his wife of 15 years, died of an accidental medical overdose. He remarried Sandra Hunt, who had two children of her own, and the two had a child together. His eldest son Michael died in a helicopter crash at age 33 while working for an oil company while inspecting California earthquake damage.

According to Scully lore, he became a baseball fan in 1936 when, at eight years old, he learned at a laundromat about how the New York Giants were badly beaten in the second game of the World Series. Eighty years later, Scully announced plans to retire from broadcasting in 2016, and called his last game on Oct. 2 of that year, the Dodgers’ season finale in San Francisco – the modern-day home of those same Giants.

Hunt preceded Scully in death in January of 2021 after 48 years of marriage. He had four children, two stepchildren, 16 grandchildren, and three great-grandchildren.