Sony Pictures TV has been the “Breaking Bad” creator’s home for the last 15 years, producing not just the iconic AMC series, but also its Bob Odenkirk-led spinoff, “Better Call Saul” — which will be ending with its upcoming sixth season — and its sequel film “El Camino: A Breaking Bad Movie,” which launched on Netflix in 2019.

Under the new eight-figure deal, Gilligan will continue working on “Better Call Saul,” which he co-created and executive produces with Peter Gould, and produce new projects for Sony Pictures Television through his High Bridge Productions production banner. 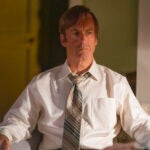 “Recently I was talking to my excellent agents (at ICM Partners,) and they reminded me my current deal was at its end. I pondered my options for maybe twenty seconds, then decided to re-up,” Gilligan said in a statement Monday. “It was a no-brainer: Sony is very generous to me, they’ve been a great place to work and I like everybody there, from Tony Vinciquerra, Jeff Frost and Jason Clodfelter on down. Also, having put in fifteen years already, I’m only a decade shy of receiving a gold Walkman.”