Rocker Vince Neil had to be taken to the hospital Friday night after falling off the stage in the middle of a concert in Tennessee.

Neil, the frontman for Motley Crue, was performing with his own band at the Monsters on the Mountain festival in Pigeon Forge, Tennessee, when the accident happened.

In a video circulated of the moment, Neil is seen coming to the edge of the stage, encouraging the audience to clap along. As he moved just a step to his right, he suddenly slipped in a crack in the stage and fell about four feet to the hard concrete below.

You can watch the tumble in the video above. 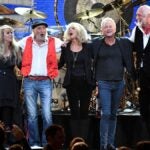 Neil was taken backstage, and bassist Dana Strum updated the crowd shortly thereafter. “The truth is Vince fell and broke ribs when he fell,” he said. “He can’t breathe and he’s gonna get dealt with medically.”

Reps for Neil did not respond to TheWrap’s request on Saturday for comment on the singer’s status.

As Strum continued explaining to the crowd what happened, he noted that Neil initially wanted to keep playing but was forced to take medical assistance first.

“Now, that sucks for us, and him, he was so excited to be here,” Strum added. “He lives in Tennessee, but he was willing to stick it out, tough it out, with the people back here telling him ‘don’t do it.'”

You can watch Strum’s full explanation to the crowd in the video below.