Numerous A-list movie directors have been out on a date with virtual reality, but no Hollywood filmmaker has stepped up to put a ring it.

Not the way James Cameron did with modern digital 3-D thanks to his $2 billion-grossing 2009 fantasy blockbuster “Avatar.” It was a watershed filmmaking moment that enhanced his brand so significantly, we still associate him with the technology despite almost a decade of delays on four planned “Avatar” sequels.

Where are the visionaries who will storm in and bring full, feature-length immersive stories? Where is VR’s James Cameron?

So far, only a smattering of directors such as Alejandro Inarritu, Kathryn Bigelow, Ridley Scott and Jon Favreau have dabbled in the space with shorts and narrative-gaming hybrids. And VR has attracted even fewer A-list actors.

One challenge in landing top filmmakers is how the the medium itself explodes linear storytelling — the sort that auteurs have learned to master. In traditional movies, directors drive you through the story, cinematographers tell you where to look and writers tell you what you should feel. In a virtual reality headset, where users control the story and frame of reference, all bets are off.

Steven Spielberg signaled the challenge before he signed on to direct “Ready Player One,” an adaptation of Ernest Cline’s best-selling novel about a teen in a VR treasure hunt. “We’re moving into a dangerous medium with virtual reality,” he said at a press conference at the 2016 Cannes Film Festival. “The only reason I say it is dangerous is because it gives the viewer a lot of latitude not to take direction from the storytellers but make their own choices of where to look.”

Given the cinematic anxieties of Spielberg and traditional auteurs, the true innovations in VR storytelling may have to come from younger generations, including those who grow up with the possibilities of the technology.

“There’s going to be a new breed of producer, director and writer that come up organically in this medium,” said Any Vick, who runs STX Entertainment’s VR division STXSurreal with partner Rick Rey.

“Colleges are teaching these courses now and are going to produce some amazing creators,” Vick said. “But in the interim to take people, either names from behind the camera or faces people recognize, and putting them in these headsets? That’s the differentiator.”

While Spielberg may be reluctant to explore VR — except as a subject matter — Oscar winners Alejandro Inarritu (“The Revenant”) and Kathryn Bigelow (“Detroit”), four-time nominee Ridley Scott and Disney’s new golden boy Jon Favreau have all directed VR expireinces in the last year.

Also Read: Is Mobile Virtual Reality Ready for Its Closeup? 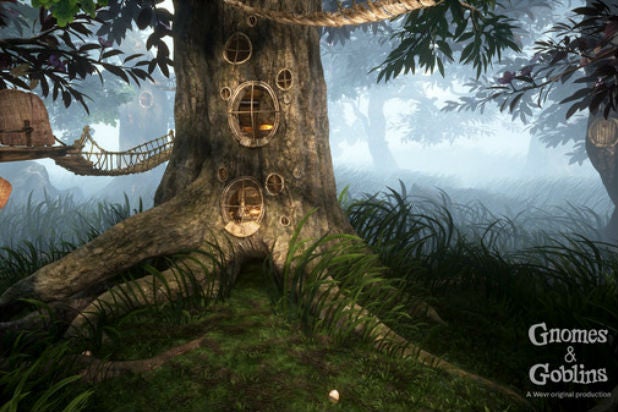 Favreau, whose  2016 live-action reboot of the animated Disney movie “The Jungle Book” was hailed as technological marvel, seems to have caught a bug for experimental high-tech filmmaking.

Last year, he teamed with Wevr and Reality One to create one of the most acclaimed VR experiences to date, “Gnomes & Goblins,” in which you inhabit the many realms of magical creatures, play in their treehouses and interact in their relationships.

It’s a strong narrative, and lags in story movement are due to the user’s own control of exploring the 360-degree environment. “I liked the sense of immersion and the idea of doing something somewhere between a game and a movie,” Favreau told the New York Times.

“Jon is a gamer and appreciated what’s different about VR,” Gigi Pritzker, a producer on “Gnomes,” told TheWrap. “His approach with ‘Gnomes and Goblins’ was not, ‘Let’s do a marketing piece for a film I’m working on,’ but let’s see what’s really unique and different about this medium and create for it.” 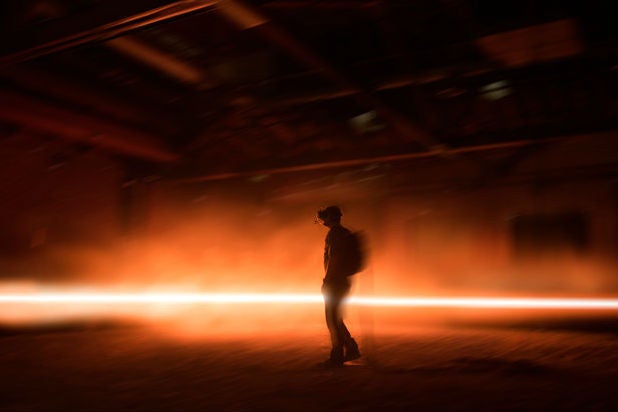 Inarritu had more serious things in mind building his highly emotional VR experience “Carne Y Arena” (“Flesh and Sand”), which puts users in the shoes of refugees during an attempt to cross a U.S. border.

The experience premiered in May at a warehouse 30 minutes outside of the Cannes Film Festival, where three field guides helped users roam through the environment (so journalists and the well-heeled of the French Riviera would not bump into walls).

Similarly, fellow Best Director Oscar winner Bigelow used VR tech to stir emotions in “The Protectors: Walk in the Ranger’s Shoes,” about ivory poaching in Central Africa. While Bigelow had a thoughtful dialogue with Hillary Clinton after its premier last spring at the Tribeca Film Festival, the audience had to endure nearly seven minutes of mutilated elephants in vivid VR.

“Alien: Covenant” director Ridley Scott, whose production company RSA Films has a division devoted to VR, shot a graphic but meticulous alien birth sequence called “In Utero,” which was a direct tie-in to his big summer movie from Fox. Scott has hinted at more standalone content in the future.

Actors are scarce in most studio VR content unless it’s an offshoot of films they’re leading — Michael Fassbender popped up in a VR short tied to “Assassin’s Creed.” Reese Witherspoon and Laura Dern filmed a companion to their 2014 awards-bait drama “Wild.”

There is also a fascinating immersive short film starring husband-wife acting duo Emily Mortimer and Alessandro Nivola called “Broken Night.” Filmed with a 360-degree camera, head movements by the VR user determine how the story pans out. Read more about it here.

At a press conference for “Broken Night,” Mortimer likened the experience to theater acting, noting how “exposed” she and her costars felt with only each other and the gods-eye camera on set.

Perhaps it’s that excitement that appealed to Spielberg — as a subject matter anyway. The filmmaker is not directly involved in the VR experiences that Warner Bros. and HTC Vive will be creating linked to “Ready Player One,” which is due in theaters next March.

Favreau believes that as more filmmakers and creatives explore VR, the possibilities for the medium will expan”d. With VR, it’s almost like we’re still in the nickelodeon phase,” he told Fortune last year. “It’s a bit of a novelty; it’s still overwhelming. People don’t really understand it, but they react very strongly to it. So we’re really at the very early part of the learning curve.”

• Why Hollywood Studios are Slow to Embrace Virtual Reality

• Hollywood’s Virtual Reality Push: How All 6 Major Studios Stack Up
• Is Mobile Virtual Reality Ready for Its Closeup?
• 15 Best VR Experiences So Far, From ‘Hello Mars’ to ‘Gnomes & Goblins’