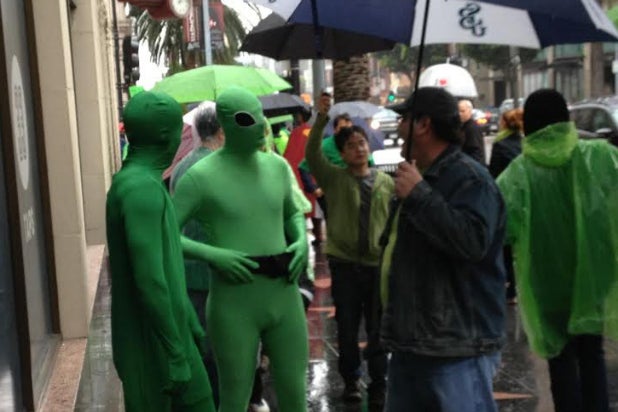 More than 500 visual effects workers gathered in the rain and drizzle outside of the Academy Awards Sunday to protest the spread of film incentives and the loss of local jobs to countries such as the United Kingdom and Canada that offer production subsidies.

They congregated blocks away from the awards show’s red carpet, forming a sea of green at the corner of Hollywood and Vine Blvds.: green shirts, green umbrellas, men in tight-fitting green spandex.

The color was a nod to the green screens over which artists and technicians build the futuristic worlds and comic book action sequences that dominate Hollywood’s biggest box office hits. They carried signs that read “Canada Stop Buying Our Jobs,” “Subsidies Create Suffering” and “Respect USA VFX.”

More than 40 states and a dozen countries offer some form of incentive — and that is part of the reason that several prominent post-production facilities have folded over the past decade.

The spread of incentives forces many artists to uproot their lives and move to Vancouver, London, or whichever city is currently offering the most generous tax benefits, demonstrators said.

“I got pissed off,” Steve Rembuskos, a visual effects worker with more than a decade’s experience, told TheWrap. “We have friends and family here. To have a career now you’re being forced to be nomadic just because a company wants to save a few extra bucks. You don’t want to constantly live in a hotel.”

This is the second year that workers have rallied outside the annual awards ceremony. Last year’s protest took place weeks after Rhythm & Hues, a studio whose work on films such as “Babe” and ‘The Golden Compass” earned awards and acclaim, yielded to financial pressure and filed for bankruptcy protection. The company went on to win an Oscar for its work last year for “Life of Pi.”

“Watching the offices empty out, while trying to finish a movie was so sad,” Erin Ramos, a former Rhythm & Hues employee, said. “It was hard to keep your morale up.”

However, she argued some good came out of Rhythm & Hues financial failure. “It was nice to see that it pushed people to take action,” Ramos said. “The circumstances around it, should be at the top of their game and to fail right before the Oscars, brought people out.”

This year’s gathering unfolded as California law makers are debating whether or not to expand and extend the state’s film tax incentive program. California subsidies are currently limited to basic cable program and films with budgets under 75 million. They are not as generous as those given out in states such as Louisiana and New York or countries such as New Zealand, which are luring major productions out of the state.

If passed, the new rules in California would allow films with budgets of up to $100 million to qualify and would enable broadcast television and other programming to apply for and receive assistance. They do not include post-production work such as visual effects.

Sunday’s event was organized by a group called ADAPT, which formed this year to pressure the U.S. government to impose countervailing duties on films that benefit from foreign tax subsidies. The hope is that levying attacks will create a financial disincentive to ship jobs and work overseas.

Dave Rand, one of ADAPT’s founding members, said the event had a positive message, despite the anger many feel about lost livelihoods and opportunities. It’s about leveling the playing field, he argued. “We don’t want to bring all the work back to L.A. or have all the work done anywhere,” he said. “The work should be done based on talent and branding, not on political schemes. What that does is destroy the creative culture that Hollywood depends on to makes its movies.”

Not even the cold and wet could dampen spirits, organizers said. “There’s a little bit of rain coming down, but everybody’s going to have a lot of fun,” Daniel Lay, one of the event’s organizers and the author of the blog VFXSolder.com, said. “Everybody started getting creative — getting green umbrellas, green ponchos — they made the best of it.”