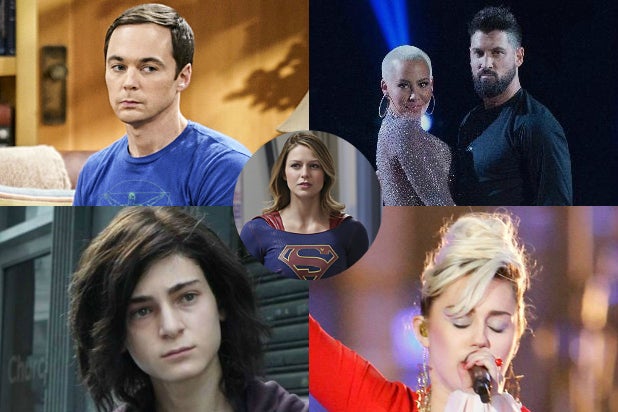 After tonight, we will have clear standings for the 2016-2017 fall TV season. Of course, that’s just one evening, but it’s fun to let your mind wander, anyway.

Looking at NBC’s lineup, it would be pretty easy to crown that broadcaster as the likeliest early lead dog. After all, it has two hours of “The Voice,” which has added Miley Cyrus and Alicia Keys, tonight — that’s gonna be a big 120 measured minutes.

Some primo alternatives will come tonight from CBS, which self-starts the whole season with “The Big Bang Theory,” which will certainly deliver out-of-this-world Nielsen numbers. Unfortunately, we’re concerned with overall averages over the course of three hours, and “BBT” marks just one-sixth of that span.

Next, Kevin James returns to TV via “Kevin Can Wait,” which just looks like Season 10 of “The King of Queens.” That thus-far critically panned newbie is a total shoulder-shrug for now in terms of viewership, but we know it won’t keep up with the Jim Parsons program.

Fortunately for the Les Moonves-led channel, all hope is not lost. Sunday’s start to “The Case of JonBenet Ramsey” was pretty darn strong — considering it competed with both “Sunday Night Football” and ABC’s Emmys — and Part 2 drops tonight at 9 p.m. ET. That programming is not exactly synergistic with the silly sitcoms, but it’s primed to individually score again in primetime, making this whole thing close.

We should give a puncher’s chance to ABC tonight, which is still riding that Ryan Lochte live-protest wave with its “Dancing With the Stars” Week 2 promotions. Unfortunately, the party kind of stops there, as “Match Game” gobbles up the evening’s final hour. Let’s eliminate Channing Dungey as a player tonight, especially among the advertiser-sought 18-49-year-olds. Win some, lose some — though ABC has mostly been putting up checkmarks in that latter column lately.

Elsewhere, Fox has absolutely no chance of competing on Monday, but the channel can keep its head held high knowing it will have the undivided attention of DC Comics nerds, for whatever that’s worth. (This just in: “not much,” advertisers say.) “Gotham” comes on there at 8 p.m. ET, with “Lucifer” to follow. Speaking of the non-Marvel-thin-graphic-novel genre, CW is just airing “Supergirl” reruns tonight — so obviously no threat to anyone there.

But let’s not cop out and close with a coin toss — that’s not how TheWrap rolls. You want a winner? Well, we’ve got two for you. NBC will take tonight in the main demo, while CBS sneaks in with a total-viewer victory.