Keri Russell looks as though she wouldn’t spend her lunch hour, much less a full work week, at Joe’s Pie Diner in the 2007 film “Waitress.” The actress does, however, bring real spine to the role of a put-upon, pregnant waitress who finds herself under siege by a beast of a boss on the job and a thug of a husband at home. Russell prevents the film from turning into a pity party.

To her credit, Jessie Mueller doesn’t look like a glamorous movie star slumming in a pink-collar role in the new musical “Waitress,” based on Adrienne Shelly’s movie, which opened Sunday at the Brooks Atkinson Theatre.

But something odd happens to this pie-crust thin story when Jenna, the resolute heroine, becomes Jenny, the singing doormat. Diane Paulus’s direction and Jessie Nelson’s book never let us forget that Jenna is victim, first and foremost. And so was her loving mother, who appears as a ghost, baking pies when she isn’t being beaten up by her own thug of a husband.

The result of all this marital and on-the-job abuse is that the men’s behavior, past and present, overwhelms the show. The first act is well on its way to breaking out the razor blades when a very supporting character, played by Christopher Fitzgerald, lifts the show and proceeds to steal it.

Fitzgerald is one of those great Broadway character actors who also has the acting chops and charisma to carry a show, but rarely gets the opportunity. (He dazzled in the lead role in the Ahmanson Theater’s production of “Minsky’s,” which sadly never made it to Broadway.)

In “Waitress,” he plays a blind date from hell who stalks one of Jenna’s waitress friends, Dawn (Kimiko Glenn), at the diner. He’s determined, he’s demented, he’s delightful as played by Fitzgerald, and it helps that in the song “Never Ever Getting Rid of Me,” Sara Bareilles has written him the best nerd showstopper since “Shipoopi” in “The Music Man.” Bareilles and Nelson don’t give Fitzgerald’s character much to do in the second act. Too bad. 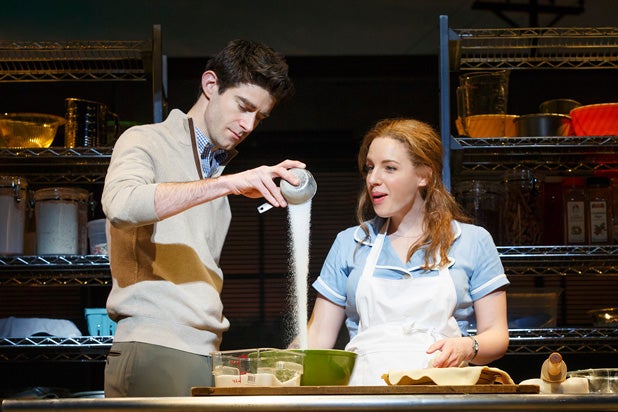 Another supporting character also dominates, but not in a good way. A third waitress, Becky, has been made up to resemble Bloody Mary from “South Pacific,” and as played by Keala Settle, it’s difficult to tell who presents the most abrasive caricature: Dakin Matthews as Jenna’s boss, Nick Cordero as her husband, or Settle as her best friend.

No wonder Jenna falls for her married gynecologist, played with loopy charm by Drew Gehling, who closely resembles Speaker of the House Paul Ryan. The scenes in his office emerge as a quiet zone in an otherwise noisy show.

And speaking of noise, Jonathan Deans’ harsh sound design turns “Waitress” into the most over-amplified show on Broadway, and that includes “School of Rock.” Why is the entire cast running around with rock-star mics stuck to their heads when they’re playing in a 1,000-seat theater with a five-piece band? Those over-the-ear mics look like an antler dislodged from a Christmas costume. Worse, they distort practically every note not sung mezza voce.

Paulus put one of those mics on Matthew Morrison in her last Broadway outing, “Finding Neverland.” It wasn’t so bad. It kind of blended into his beard. Those cumbersome sticks, however, create a much greater distraction in “Waitress” (and are so ugly they’re absent from the publicity photos).

Watching the movie “Waitress,” you might wonder about Jenna having sex in an advanced state of pregnancy. In the musical, you worry that she and the doctor might impale each other with their head gear. The wonder here is how Paulus choreographed her actors to kiss with these lightning rods so close to their lips.

Paulus has admirably directed a small-scale, low-tech show in every other respect. Scott Pask’s set design is simple and spare. Scene changes often take place with actors pushing and pulling tall racks of pies into place. The imaginative visuals are at total odds with the obtrusive audio.

In addition to Fitzgerald’s showstopper, Bareilles has written a couple of sweet duets for her two lovers, “It Only Takes a Taste” and “You Matter to Me.” She’s good when she keeps it small. Much less effective is the overwrought ballad-lament “She Used to Be Mine,” which Mueller radically oversells as a kind of “Rose’s Turn,” which it isn’t. The song, however, does cause her water to break, finally.