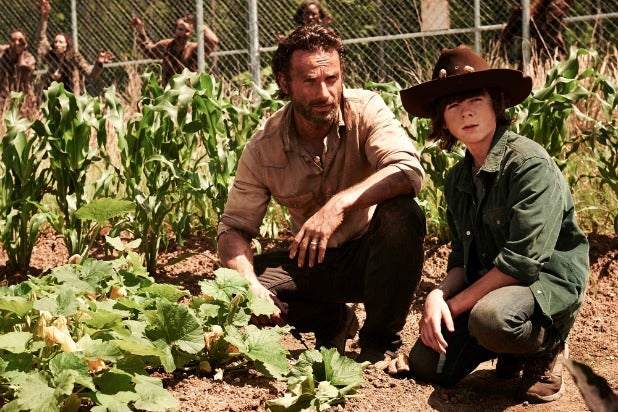 This season of the “Walking Dead” wasn’t exactly light on symbolism. People who wanted to see zombies get stabbed in the head real good probably came away very satisfied. But fans looking for meaning had plenty to chew on, too. In fact, they didn’t need to chew: most of the symbolism was spoon-fed with a shovel.

In case you somehow missed them — and we’re pretty sure you didn’t — here are some very symbolic things that happened on the just-wrapped fourth season of “The Walking Dead.”

1. Rick plants seeds: Get it? Seeds? He was putting down roots, actual roots, in the hopes of his small seeds sprouting into something bigger: A peaceful civilization behind the prison walls. Hey, Carl even started raising pigs for food. This is going great!

2. Rick kills the pigs: Oof. The pigs were part of Rick’s grand plan for creating a new, autonomous society. But Rick and friends also discovered one of the drawbacks of close quarters when a virus swept through the prison. Rick blames the pigs, and has to kill them, one at a time, sullenly. Because he is also killing his dream.

Graduates of Mr. Bland’s ninth-grade English class at Dodson Junior High — hi, Mr. Bland! — will recall that killing the pig in “Lord of the Flies” represented a descent into savagery. For Rick, it’s a little more complicated. The pig-killing is part of a one-step-up, two-steps-back attempt to climb out of savage desperation.

3. Rick finds bullets in the garden. Violence will also intrude on domesticity in the world of “The Walking Dead.” This was probably the most subtly effective scene of the season.

5. Rick bites Claimer Joe in the neck. Rick borrows a page of the zombies to protect his son and Michonne. Mr. Bland would have loved this one: Man’s inhumanity to man, descent into savagery, the living become the dead, etc. This was the most very heavy-handed symbolism of the season, but it worked.

What other very meaningful things did you catch on this season of “The Walking Dead”?