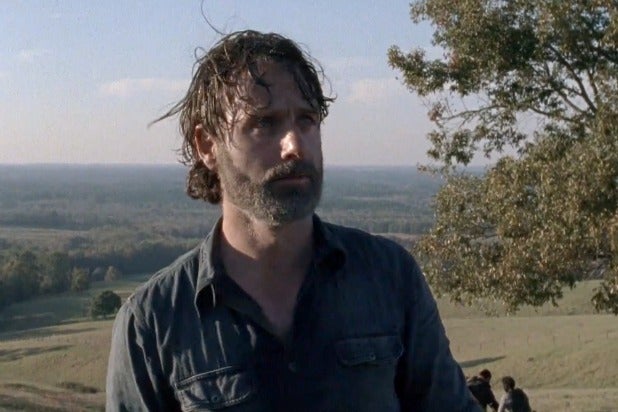 (Spoilers ahead for the season 8 finale of “The Walking Dead”)

There was a moment there, at the final throwdown between Negan (Jeffrey Dean Morgan) and Rick (Andrew Lincoln), that I thought Rick had actually killed Negan.

I was hardly alone in thinking that. Rick finally got Negan to let his guard down by talking about Carl (Chandler Riggs), and then he slashed Negan’s throat with a piece of glass. Negan was lying there on the grass bleeding out for like a minute as Rick turned away from him to talk to his people.

I don’t have any idea how I’m supposed to interpret “Rick takes a piece of glass and cuts Negan’s throat with it” as anything other than a murder attempt. That a minute later he had somebody patch him up doesn’t change that.

And, like, that’s fine. If the folks behind “The Walking Dead” wanna conclude this story by having Rick murder Negan or try and fail to murder Negan then that’s up to them — it may not be overly satisfying from a narrative perspective after 8 episodes of people crying about Carl the Pacifist, but it would probably be a sincere thing. But that’s not what happened. The show, judging by the incredibly self-righteous speech Rick immediately turns around and gives indicates that how I interpreted this sequence — as a murder attempt — was not what they were going for. That Rick slashing Negan’s neck with a piece of glass was somehow Rick intentionally making a disabling move rather than a lethal one.

But I don’t buy it for one second. The language of movies and TV says if you cut somebody’s throat like that they’re going to die and you were trying to kill them. The exception would be if the character doing the slashing has demonstrated such skill with a blade that they could intentionally slice somebody’s neck wide open without killing them — a skill Rick has certainly never demonstrated.

So Rick tries to murder Negan, and then he turns around and recites Carl’s ideology of peace to everybody like he hadn’t just specifically done what Carl asked him not to.

“What happened, what we did, what we lost, there’s gotta be something after. The ones who have ‘em up, put your hands down. We’re all gonna go home now. Negan’s alive. But his way of doing things is over. And anyone who can’t live with that will pay the price, I promise you that. And any person here who would live in peace and fairness, who would find common ground, this world is yours, by right. We are life. That’s death!” Rick said, referring to a crowd of zombies down the hill. “And it’s coming for us, unless we stand together! So go home. Then the work begins. The new world begins. All this… all this is just what was. There’s gotta be something after.”

Also Read: Did 'The Walking Dead' Just Hint at Future Villains the Whisperers?

There’s no remorse from Rick there that he almost screwed the whole thing up by murdering Negan 30 seconds earlier. Rick doesn’t acknowledge that he didn’t spare Negan; he just got lucky that he didn’t open up his throat so badly that their primitive medical knowledge wouldn’t be able to save him. After a season of bloodlust in which Rick continually demonstrated an unwillingness to even try to make peace with Negan — remember, it was Michonne (Danai Gurira) who pitched Negan on peace by reading Carl’s letter to him last week — he still didn’t until after the war was over, after Negan lay on the ground bleeding to death because Rick tried to murder him in the moment of truth, actually try to embrace Carl’s rhetoric.

That’s not earned. Rick was a moral failure this whole season, right to the very end. And when that end came, Rick got back up on his high horse and tried to pretend otherwise with yet another of his sanctimonious speeches.

Rick didn’t earn it this time, though, and it drives me absolutely crazy that the show would try to claim otherwise.