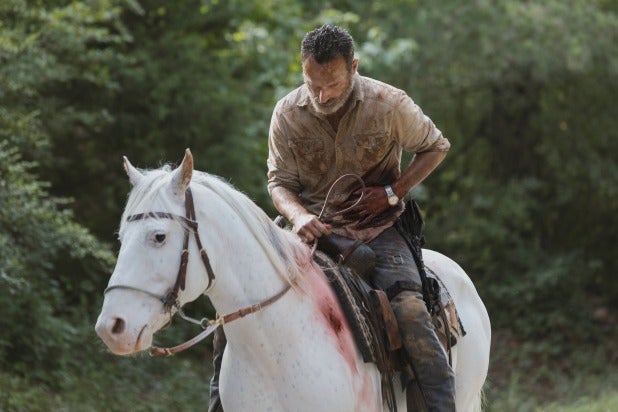 (Major spoilers for the Nov. 4 episode of “The Walking Dead” on AMC)

After months of talk about how Andrew Lincoln would be leaving “The Walking Dead,” with everyone assuming that meant Rick Grimes would bite the dust after being the center of the series since it began so many years ago, it appears now that AMC may have pulled a bit of a fast one on everyone.

That’s because, as of the end of what AMC has billed as Rick Grimes’ final episode, Rick Grimes is not dead. He looked like he blew himself up when he destroyed the bridge to keep the herd of zombies from reaching any of their settlements.

Instead, he’s rescued by Jadis after washing up on shore downriver, put on that mysterious helicopter, given medical attention and taken away to who knows where. And then “The Walking Dead” gave us a big time jump of at least two years and we’re left to wonder what all this means.

Also Read: 'Walking Dead': Everything We Know About Jadis and the Helicopter

AMC says these projects will go into production “as early as 2019.” For more on this new aspect of the “Walking Dead” universe, click here.

Also Read: 'Walking Dead': Who Is Magna and Her New Group of Survivors?

If Rick is indeed taken to the Commonwealth, there are plenty of question marks about Rick’s story there. For one thing, it seems incredibly unlikely that Rick would choose to stay there of his own volition for years with Judith and Michonne (Danai Gurira) still back in Alexandria, presumably thinking he’s dead all this time.