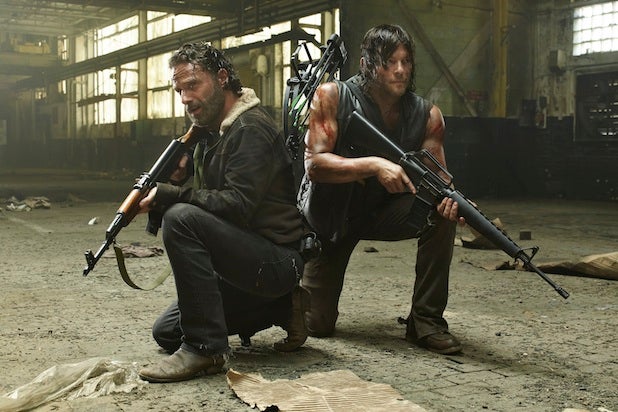 “The Walking Dead” has walked away with a new ratings record.

The premiere of “Walking Dead” at 9 p.m. drew 17.3 million total viewers, with 11 million of them in the advertiser-sought 18-49 demographic. That was enough to beat out the previous high mark for “The Walking Dead,” which was the Season 4 premiere last year.

See video: ‘Walking Dead’ Premiere: 4 Stars on What to Expect for Season 5

Compared to the Season 4 premiere, Sunday’s “Walking Dead” was up 7 percent in total viewers and 6 percent in the demo.

The Season 5 opener was also the highest-rated program in the demo on Sunday night, beating out even the mighty “Sunday Night Football” by more than 2.5 million demo viewers.

A 10 p.m. encore airing added an additional 6.9 million total viewers, with 4.5 million of them in the demo.

“It’s a dead man’s party. Who could ask for more?” said AMC president Charlie Collier said of the numbers. “Enormous thanks to our friends and executive producers Robert Kirkman, Scott Gimple, Greg Nicotero – who also directed last night’s terrific premiere – Gale Anne Hurd, Dave Alpert and Tom Luse and all of their fellow producers, cast and crew for everything they do to make the #1 show on television such a unique and incredible experience for the fans.’The Walking Dead’ is one of those increasingly rare shows today that can command a live audience not significantly cannibalized by time-shifted viewing. Who would have thought that cannibalized television could be curtailed by cannibal-ized television?”

The “Walking Dead” after-show “Talking Dead” likewise hit a record with Sunday’s episode, which was its Season 4 premiere. The after-show drew in 6.9 million total viewers, with 4.5 million in the demo — jumps of 34 and 35 percent, respectively, over its Season 3 premiere.