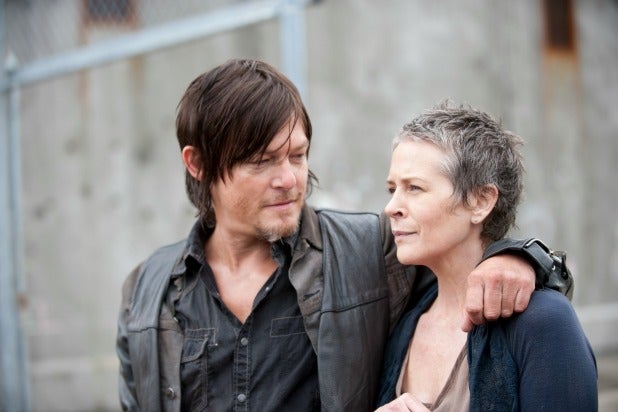 Was anyone else a little underwhelmed by Sunday’s “Walking Dead” return?

I wrote last week that the premiere was a little boring, and I’ll stand by that. The problem isn’t new show runner Scott Gimple’s stated intention to focus on character development. (We TV critics gravitate to that sort of thing like zombies to carcasses.) The problem is that I didn’t see real character development in Sunday’s Season 4 premiere: just a lot of sloppy exposition and pandering pans of good-looking survivors whose haircuts get more stylish as the apocalypse wears on. We met a bunch of new folks we know will be eaten soon, and old characters symbolically planting seeds with what must be very heavy hands.

Also read: ‘Walking Dead’ Season 4 Review: The Zombies Are Slower Than Ever

Am I alone in thinking “The Walking Dead” is better than this? Lots of critics were more charitable, including Time’s Nate Rawlings. He praised “one of the series’ best opening scenes yet.” He also called the walkers-through-the-ceiling sequence “one of the more impressive zombie battles we’ve seen in a while.”

“What if you tuned in to watch “The Walking Dead” and an episode of “Green Acres” broke out?” asked the Contra Costa Times’ Chuck Barney. “That’s what it sort of felt like in the early moments of Sunday’s Season 4 opener.”

But Barney remained confident in Gimple. “Gimple is surely smart enough to know that, even with a more contemplative, character-driven approach, this show can’t thrive without heated conflicts and scary threats and lots of bloody splats. And so he gives us ominous scenes of zombie hordes pushing up against the cyclone fences,” he wrote.

HitFix’s Alan Sepinwall said it remains to be seen whether Gimple can “maintain a level of quality and consistency over a long period.”

But he noted that “the show tends to run into trouble when things are too peaceful,” and that the new characters feel a little disposable. Sepinwall wrote that they “have the air of redshirts, there to be picked off one by one… while the bulk of the main cast survives. Beth’s attitude towards the newbies — friendly, but not emotionally invested, so she won’t feel bad when some of them inevitably die — could well be how Gimple expects us to feel about them.”

The Onion AV Club’s Zack Handlen also worried about the interchangeability of the characters and situations.

“As an episode of television, then, this is solid–nothing remarkable, exactly, but entertaining. (And the store attack scene really is swell.) But as an episode ‘ The Walking Dead’ — or, more importantly, as the first episode of a new season of ‘The Walking Dead’ — it’s somewhat troubling. The stuff that works … has very little to do with the recurring ensemble. Apart from the fact that we recognize the faces, the store attack could’ve happened to anyone at any point, and despite Rick’s agonized expression, the encounter with the Crazy Lady was most compelling for what we learned about a character we’ll never see again. Sure, it turned out to be another excuse for Rick to wonder if anyone can possibly hold on to their humanity in the midst of all this horror, but by now, the answer to that is pretty obvious, isn’t it?”

The Washington Post’s Hank Stuever compared the show to a video game, and wondered if it’s worth sticking with a series that has no hope of a happy ending — at least, not an honest happy ending.

“There is only a reset button (revolving showrunners, new writers) or a fresh level of horror and despair, just like the popular video game based on the show which emphasizes the feelings and personalities of characters, who could all die at any moment. The TV show also banks on non-zombie intervals of personal conflict among the still-living, who behave like test subjects in a morbidly long experiment of applied social psychology,” Stuever wrote. Still, he said, he can’t stop watching.

I know the feeling.