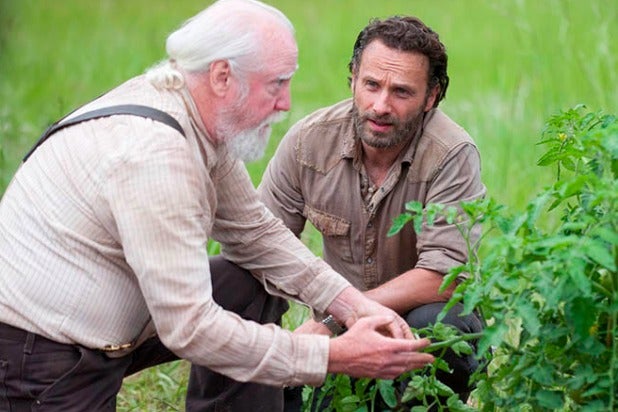 The “Walking Dead” is back, and it’s… kind of boring, actually.

I know, that’s not something you usually say about a zombie story. Or about “The Walking Dead,” TV’s top scripted show. But there it is. I really like “The Walking Dead.” I’ll probably never stop watching it. But during the first two episodes of Season 4, I almost nodded off twice.

It wasn’t the zombies’ fault: They’re still moaning, groaning, menacing. But the writers aren’t killing the way the walkers are. For some reason, they’ve decided it’s time for Rick Grimes to go through a gentleman-farmer stage, which is good for his temperament, but not for drama. There’s a reason “Star Wars” didn’t spend too long on Aunt Beru and Uncle Owen’s moisture farm.

The other characters are looking good, too. With The Governor no longer a constant threat — or driving force of the plot — they’ve started to let down their hair. (Everyone’s is longer, which looks just great.) They have lots of new love interests we know will be dead very soon. Daryl, with his leather jacket, crossbow and ape hanger handlebars, has no excuse not to be the coolest character on TV.

Except maybe his lines. He, like everyone, needs more to do. Of course a show punctuated by ripped-out intestines needs to slow down and re-set once in a while. Season 3 started slow, too. But Season 4 starts with things happening that don’t need to happen, like a bottle-episode type sequence (spoiler alert: a creepy-looking woman turns out to be creepy) that serves only to introduce three questions Rick asks anyone who wants to enter the prison gates.

The questions nicely encapsulate where our heroes now stand. But getting to them is a slog.

“Walking Dead” has a new showrunner in Scott Gimple, who wrote the Season 4 premiere. He replaced Glen Mazzara, who last year shared with TheWrap some of the “Walking Dead” writing rules that made the show so fun to watch with him in charge. Among Mazzara’s rules: Keep surprising the audience with accelerated storytelling, and don’t slow down to over-explain.

“The Walking Dead” no longer seems to follow those rules. The most disappointing example is a scene that serves to tell us the group now has a council, and who serves on that council. It’s the kind of thing that could be explained by just showing us the council, which the show eventually does. Was I excited to see the council? No. I’m here for the biters.

The most boring part of the new episodes is the ceremonial trotting out of characters we know will be eaten soon. You’re cute, a regular cast member likes you, and you’re going on a supply run? Hope you’ve picked out a coffin.

The lone new actor who seems likely to stick around is Lawrence Gilliard Jr., who joins fellow “Wire” veteran Chad S. Coleman, though I don’t believe their characters ever crossed paths on their old show. Gilliard’s Bob has a compelling problem: We see it when he lingers on bottles of booze during a supply run, right before zombies start falling through the ceiling. Fighting alcoholism mid-zombie apocalypse sounds like a good storyline, and the show touched on the idea before, with Hershel. It’s just the kind of nasty little bomb the writers should be setting on episodes this slow, assuming it eventually goes off.

I’m not saying nothing happens in the first two episodes. I mentioned the ceiling walkers. But there’s a difference between routine zombie attacks (yep, I just wrote those three words) and chain reactions we know will build to awesome conflagrations. We got one with Hershel’s farm, and another with the cross-attacks on Woodbury and the prison. The biggest lurking danger this season seems to be one we see at the start of Episode 2.

The second episode might have been a pretty good first one. Almost everything crucial to the premiere episode feels like it could have been worked in, and plenty of Episode 2 scenes could go. There’s a very cool, dark twist at the end of the second episode, but it comes only after a climax that it equally undramatic and unpleasant to watch. It has Biblical undertones that suggest the show is going for small, lyrical moments.

I don’t want a zombie show with small, lyrical moments. Another Georgia-set series, Sundance’s “Rectify,” does that sort of thing much better. I want my zombie shows packed with living things pushed to their limits, and dead things dying for good. And things going boom along the way.