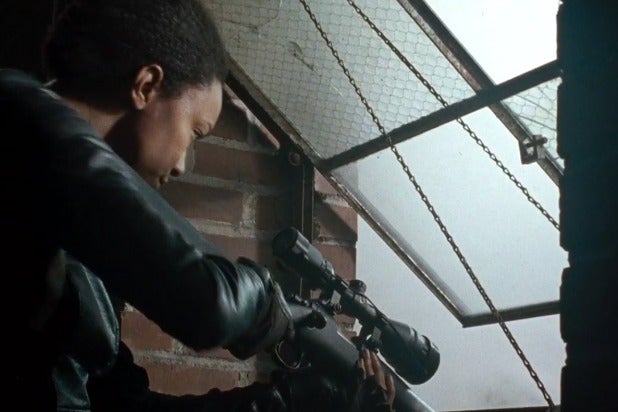 (Spoilers ahead for “The Other Side,” the March 19 episode of “The Walking Dead.”)

This week’s episode of “The Walking Dead” ended with a cliffhanger — Eugene (Josh McDermitt) refused to be rescued when Sasha (Sonequa Martin-Green) and Rosita (Christian Serratos) came calling, Sasha took off into the Saviors’ compound without Rosita, and Daryl (Norman Reedus) came sauntering up as Rosita was leaving. The entire episode was spent setting up Sasha and Rosita’s incursion into the Sanctuary, but we’re going to have to wait another week to find out how it actually goes.

Meanwhile, the teaser for next week’s episode showed us Rick and co. gearing up for war, finally, and heading out — presumably also for the Sanctuary. So it would appear that the war between Alexandria and the Saviors is imminent and could start as early as next week.

But Rosita, Sasha, Daryl and Eugene are very much wild cards in all this. We can guess roughly how the war overall is going to go, because that actually happened in the comics. Whatever is going on with those four, however, is completely up in the air.

Here’s why: Sasha and Daryl are both original to the show and never appeared in the comics; Rosita in the comics was long dead by this point in the story; and while Eugene was at one point captured by the Saviors in the books, he never collaborated with them the way he does on the show.

Which means we’re in one of those rare spots on the show where it’s tough to guess how a scenario will play out. We’ve had a few situations like this before — the big one being Beth’s stay at Grady Memorial Hospital, which was 100 percent original to the show.

Complicating things is another moving piece: Dr. Harlan Carson (R. Keith Harris), whose brother Negan (Jeffrey Dean Morgan)  tossed into the furnace a couple weeks back. The Saviors this week paid the Hilltop a visit to retrieve Harlan because they need a replacement doctor. We can make a guess as to how he’ll play into this — in the comics Negan never killed Harlan’s brother, and Dr. Carson instead actively worked against the Saviors from the inside.

It’s a safe bet that when everything hits the fan in the next couple episodes that Harlan Carson will be an important cog.

We also can guess Sasha’s eventual fate, though not because of anything related to the “Walking Dead” source material. We suspect Sasha will be killed in the upcoming battle with the Saviors because actress Sonequa Martin-Green has signed on to star in “Star Trek: Discovery.” A move like that behind the scenes typically means a series exit of some sort — and characters don’t exit “The Walking Dead” alive.

Also Read: 'The Walking Dead': The Most Shocking and Disturbing Deaths So Far (Photos)

Right now, the pieces are scattered but all pointed in one direction: at the Saviors’ Sanctuary. Alexandria is gearing up, they’ve got their friends in the Scavengers on call, Morgan and Carol are feeling the bloodlust at the Kingdom, and Daryl and Rosita are armed and ready right outside the compound. It feels like everything’s just about ready to blow in the final two episodes of the season.