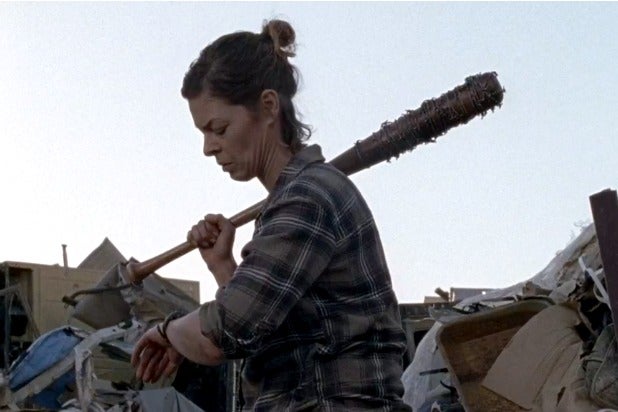 Okay, look. Things are really getting out of hand in season 8 of “The Walking Dead” — and I mean that as a compliment.

It’s been a rare situation in the eight years this show has been on where we couldn’t guess exactly what they’re doing and where they’re taking this whole thing, but that’s exactly the situation we’re in now as the war between the good guys and the Saviors has gone in a completely different direction from how the “All Out War” story went in the comics. The book version of the story ended after the Saviors’ assault on the Hilltop, which we saw last week, but we haven’t seen anything that looks like a resolution on the horizon in the show yet.

We’re in uncharted territory here, but it’s not just that the war is resolving differently — those in charge behind the scenes keep throwing in wild cards that go far beyond the scope of the facts of the world as we know them.

Also Read: 'Walking Dead': Who the Hell Did Negan Pick Up in His Car?

The biggest example was the appearance of Georgie (Jayne Atkinson), who showed up out of nowhere to give Maggie (Lauren Cohan) a book of instructions on how to build mills and aqueducts and stuff — and let’s not forget how similar Georgie looked to a certain character from the comics who is not due to show up for a long time from now.

Just as important as that shocking plot thread is this helicopter we saw this week at the junkyard while Jadis (Pollyanna McIntosh) was about to do something horrible to Negan (Jeffrey Dean Morgan). It was the second time we’ve seen it this season — it first popped up nine episodes ago, just before Rick (Andrew Lincoln) visited the junkyard to try to pitch the Scavengers on taking on the Saviors. And we also can’t forget the conspicuous appearance of a helipad at the junkyard when Simon showed up to murder everybody a few weeks back.

Its appearance this week brings up so many questions. Was Jadis sitting around by herself in the junkyard waiting for it to come back and take her away? Did it belong to the Scavengers? Did it fly by because Negan set off that flare or was it showing up on schedule — Jadis certainly seemed to be expecting it, judging by her wristwatch alarm.

There’s no way to know the answer to those questions just yet, but I’m betting we’ll find out before this season ends two weeks from now. And I’d also bet the helicopter has something to do with Georgie’s sudden arrival on the scene.

If I were to hazard a guess as to what the deal is with the helicopter, I would make the same guess I made about Georgie when she first appeared: they’re from the Commonwealth.

The Commonwealth of the comic books is the current main plot line. They’re a group that have established an actual city with over 50,000 people in it in Ohio, and they have electricity and team sports and all those sorts of modern conveniences.

My thought is that the Commonwealth has been using that helicopter to basically scout Virginia for both survivors and the sorts of people who have managed to pull together well enough that they could maybe be integrated into their own new society. And Georgie represents the boots on the ground, evaluating the situation from up close.

Also Read: 'The Walking Dead': Key Events in the Series So Far (Photos)

The immediate question, then, is about the significance of the Scavengers having a helipad and the helicopter’s appearance above the junkyard. Based on how Georgie described the sort of groups she’s looking for, the Scavengers don’t even remotely fit the bill. It could be that the Scavengers dragged that helipad in basically on spec, in hopes of drawing whoever it is down to the junkyard. But the fact that Jadis was seemingly expecting it to show up when it did would seem to indicate it had landed there before and maybe even that Jadis had some kind of arrangement with whoever was flying it.

It’s a lot to consider and simply not enough information yet.

The Commonwealth coming up next would mean that the show will skip the next big story from the books, the Whisperer War. It’s not hard to guess why AMC would be eager to move past that whole storyline — ratings for “The Walking Dead” are at their lowest since very early in the show’s run, and nobody wants to see another bleak war situation for several seasons. The Commonwealth represents a significant change of pace from the depressing norm of the show, so it would be nice to get straight to it.

Whatever it is, let’s hope we get some answers in the final two episodes of season 8.