(Major spoilers ahead for the Oct. 20 episode of “The Walking Dead” on AMC)

It it’s often that “The Walking Dead” will straight up show you things that didn’t happen, but the show definitely did that this week in the scenes that focused on Carol’s (Melissa McBride) point of view. Carol, still reeling from the death of her adopted son Henry, has gone a while without sleep, relying on some kind of stimulant pills to keep her going. And when she starts to hallucinate, it’s tough to know exactly what was real and what wasn’t in her scenes.

In the episode, the residents of Alexandria faced a strange series of zombie incursions — incursions that the Whisperers claim they didn’t cause. The Alexandrians had to spend several straight days fighting off these groups of walkers, leading to pretty serious sleep deprivation for a bunch of the main characters.

Carol, still pretty tilted by the Whisperers murdering Henry and putting his head on a spike last season, didn’t even take naps during this span, popping stims instead to stay awake. And after several days without sleeping, it becomes pretty clear she’s hallucinating things.

Shortly after the Alexandrians meet with Alpha to talk about their past breaches into Whisperer territory and where these zombie armies may have come from, Carol spots three Whisperers in the woods and gives chase. Michonne (Danai Gurira) and Daryl (Norman Reedus) take Carol’s alarm seriously but no one else spots the trio.

Carol and Daryl set up shop in a nearby abandoned school, and Carol sees a vision of Henry — this is obviously not real, and Carol starts to doubt herself. Daryl tells her about his father, a truck driver who rarely slept and once hallucinated seeing a girl run in front of his truck.

Later, Daryl tries to get Carol to go home and get sleep — and stop taking those stims. Carol insists on one more hours, and cracks that she isn’t like Daryl’s meth-addicted trucker dad. Daryl, confused, says his dad didn’t drive a truck.

The last leg of this confusing journey has Carol venture, alone, into the school’s gym, where she’s caught in a classic rope trap and gets stuck hanging upside down. A Whisperer approaches and Carol swipes at it with her knife. As a group of real zombies enter the room, the Whisperer retreats, and Carol fires her last bullet at it. Carol manages to cut herself loose and fight off the zombies, and Daryl finds her afterward standing alone in the room with a large piece of glass stuck in her arm.

At that point it’s basically impossible to figure out whether any of that was real, but we get a big clue at the very end of the episode. We return to that gym, now empty, and the camera tracks a trail of blood outside to a corpse — a Whisperer corpse, that wakes up as a zombie right as the episode ends.

So we can pretty confidentially guess that the fight in the school gym was real, and that a Whisperer was hanging out in Alexandria’s territory leading some zombies around. This is a no-no for the Whisperers, just as the Alexandrians aren’t supposed to cross into Whisperer territory.

But we don’t know what other real, important things Carol saw. Fortunately, we don’t have to worry about most of it — it doesn’t really matter that she hallucinated a conversation with Daryl, because that was there to establish that Carol’s perspective isn’t reliable and it isn’t super relevant to the greater plot. What we do have to worry about, however, is whether Carol actually saw those three Whisperers in the woods earlier.

Michonne doesn’t buy it, but Daryl, at least, says he does. And Carol, too, insists she didn’t imagine that one. Which is important to note, since she is also aware how unreliable her perspective has been. That she still thinks that particular incident actually happened despite know she had been imagining other things could just be stubbornness, but I like to think she did some sorting of her memories and has real reasons to believe that was real beyond just her desire to fight the Whisperers.

Likewise, Michonne has reason to not believe Carol — or, rather, reason to say she doesn’t believe her. For the residents of Alexandria, the Whisperers breaching the border like that, and perhaps taking action against one of their own, could be cause for a war that Michonne doesn’t think Alexandria would survive. So a Whisperer incursion would force Michonne to make a decision. By saying that Carol was just hallucinating, Michonne gets to avoid that decision for now.

We’ve all watched plenty enough “Walking Dead” to know that the peace of this cold war won’t last. Michonne definitely also knows that, but she also knows that the right moment to go to war is not when all her fighters have barely slept for several days.

If I had to guess, I would say that Carol did not hallucinate those three Whisperers in the woods. I went back and checked that first incident after finishing the episode, and it looks like the dead Whisperer from the gym may have been among the three in the woods. See for yourself — I brightened up the shot from the woods and the clothes look similar. Look at the one on the left here: 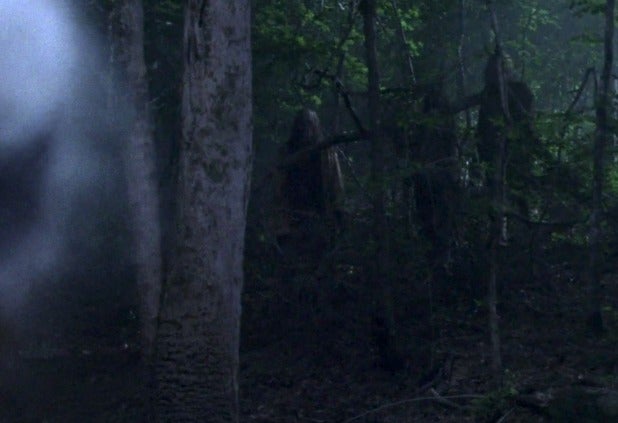 And compare that to the daytime shot of the dead Whisperer at the end: 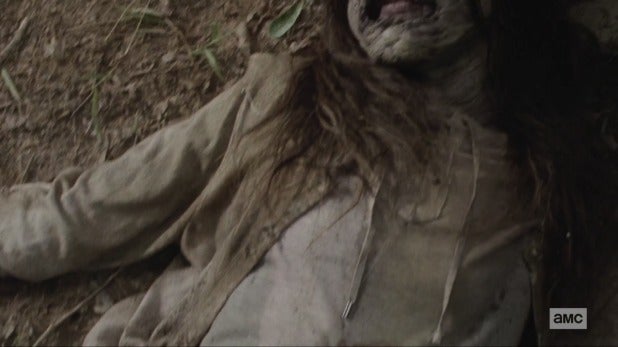 That dead Whisperer is wearing a very specific type of shirt and jacket that none of the other ones we saw this week wore. That first shot is too dark to draw any firm conclusions but, as I said, my guess based on this evidence is they’re the same. Could this be a rogue element of the Whisperers trying to start a war?

We’ll find out soon enough, because it’s likely that war will begin before we reach the mid-season finale in five weeks. For now, maybe I’m reading too much into it. But I don’t think that Angela Kang and co. would go with this whole thing about Carol hallucinating if we weren’t supposed to obsess over the details. But we’ll see.

Ahead of Netflix’s new zombie-drama ”Black Summer,“ we ranked zombie TV shows from worst to best