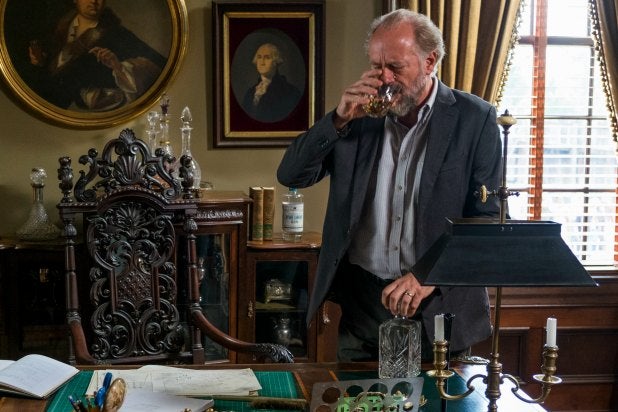 (Spoilers ahead for the March 26 episode of AMC’s “The Walking Dead,” “Something They Need.”)

UPDATE: Gregory did not appear in the season 7 finale, but that doesn’t mean he’s out of the picture just yet. The events of the finale simply didn’t cover enough ground to get to Gregory’s part in the burgeoning war between the Saviors and Alexandria. So if you want a look into what season 8 likely has in store, read on.

ORIGINAL STORY: As season 7 of “The Walking Dead” nears its conclusion and war between Alexandria and the Saviors feels imminent, we’ve been spending more time than usual lately with a character who hasn’t had a lot to do this year but will no doubt be a major player in next week’s season 7 finale: Gregory (Xander Berkeley), the leader of the Hilltop.

Gregory is experiencing a lot of personal turmoil these days, what with his desire to stay in power, his fear of Negan (Jeffrey Dean Morgan) and the Saviors, and his knowledge that Rick and co. are going to attack Sanctuary with the help of people from the Hilltop. If Alexandria, with the help of Jesus and his recruits, topples Negan then Gregory will probably be out because those who are going to war view him as Negan’s lapdog. If the Saviors defeat Alexandria’s Jesus-aided uprising, then Negan could do some kind of brutal torture and/or murder thing to Gregory as punishment for not keeping a firmer hand on the Hilltop.

His position is fragile, and he knows it. That whole incident this week with Maggie having to save him from a walker only made things worse in his mind — his inability to save himself from even a single walker made him look very bad in front of his men.

But he’s definitely not just going to sit idly by and let events play out. On this week’s episode, “Something They Need,” we see Gregory pull out a map and tell his assistant Kal that they’re going on a long trip somewhere. Gregory is finally going to spring into action.

But where is he actually going, and what’s he going to do when he gets there? The show is keeping Gregory’s plan close to the vest for now, but you can bet whatever he’s up to is going to matter big time either in next week’s season finale or in season 8.

Fortunately, we don’t have to guess what Gregory’s doing because the “Walking Dead” comics give us a pretty clear indication of where Gregory is going.

The comic book equivalent of the story territory we’re entering on the show is “The Walking Dead Volume 20: All Out War – Part One,” where Alexandria and the Kingdom, along with some men from the Hilltop, march on the Saviors’ Sanctuary. Before the fighting kicks off, this army is greeted by Negan — who has a surprise for them.

That surprise is Gregory, who sneaked out of the Hilltop to warn Negan of the imminent attack. Gregory says the Hilltop’s allegiance remains with the Saviors and that any of his people in Rick’s army are free to leave with him before the fighting starts. Several do, and they head back to the Hilltop.

It’s likely, then, that Gregory’s story on the show will be similar. The trip he’s going on with Kal is probably to do exactly what he does in the comics: warn Negan about the attack and attempt to keep his people out of the fighting. Though it’s entirely within the realm of possibility that he’ll diverge from his comic book path and do something unexpected.

Either way, we probably only have to wait until the season 7 finale next week to find out.

'Walking Dead': Here's Where Every Faction Stands Ahead of Season 7 Finale (Photos)

There are a lot of moving pieces in play as Rick and co. get ready to take on Negan’s Saviors

As season 7 of "The Walking Dead" approaches its climax, it definitely looks like the war with the Saviors is about to kick off in earnest. After a whole season of political machinations and false starts, Rick is going to lead his people into battle -- hopefully with the help of some other groups the Saviors have been pushing around. But there's a lot of division even now. Here's where the six factions of season 7 all stand as the biggest battle in "The Walking Dead" looms.