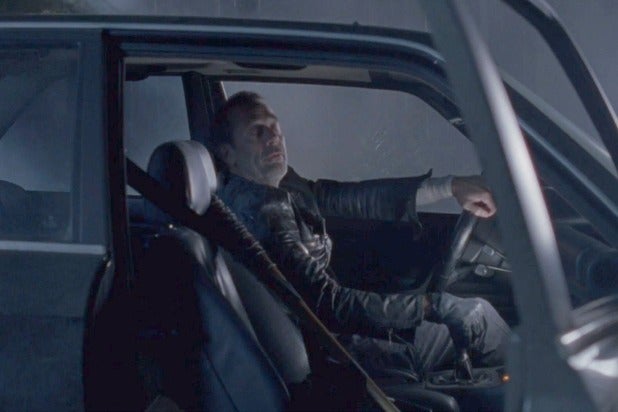 Another week, another weird mystery on “The Walking Dead.” One of the fun things about this season so far is how it likes to casually present mysterious things but not act like it’s being mysterious or that there’s even anything particularly significant about the mysterious thing.

The latest example of that phenomenon came at the end of this week’s episode, after Jadis (Pollyanna McIntosh) let Negan (Jeffrey Dean Morgan) go and he heads back to the Sanctuary. Midway through his drive he sees somebody next to the road and he stops to pick them up.

“If shit could shit it still wouldn’t look as shitty as you,” Negan declares as he opens the door for whoever it is. The person gets in the car, and the continue on.

When they arrive at the Sanctuary, Negan tells the Saviors at the gate not to tell everyone he’s alive and back, because he has surprises for them. And, depending on who’s in the car, those surprises may involve some bad news for a certain character who’s been working as a double agent inside the Saviors for a while now.

We’re going to have to wait until at least next week to find out for sure, but folks on Twitter pretty much agree on who they think it is — and I also agree.

I would bet that Laura was the mystery person Negan found. She saw Dwight betray them after all. #TheWalkingDead

HOW MUCH YOU WANNA BET IT WAS LAURA THAT NEGAN SAW!!! #TheWalkingDead

OMG That had to be Laura that Negan found on the side of the road. I am super nervous for Dwight now! #TheWalkingDead

Think #Negan picked up that one women who Dwight betrayed. So now Negan knows Simon disobeyed and may possibly know about Dwight’s betrayal as well. A lot of plot twisting and turning this episode #TheWalkingDead

Now Savior Laura (Lindsley Register), as you might recall, has been missing for a bunch of episodes, ever since a group of Saviors, including Dwight (Austin Amelio), got in a shootout with some good guys back in the midseason finale. Dwight betrayed the Saviors during the fight, killing almost all of them — except Laura, who managed to escape but hasn’t been seen since. Dwight’s cover within the Saviors depends on Laura staying disappeared, so if she managed to make her way back and told Negan what happened on their drive, then you can expect a big confrontation next week.

There are other possibilities — we haven’t seen any of the folks who attacked the Hilltop since they fled the scene of that battle last week, so in theory it could be one of those folks who then spilled the beans about Simon’s power grab and murderous tactics. Gregory, also, hasn’t been seen since he escaped the Hilltop prison — he notably was not with the escaped Saviors when Rick and Morgan caught up to them. Hopefully we’ll find out soon!

That wasn’t the only weird mysterious thing we got on this week’s “The Walking Dead.” Earlier in the episode we saw the return of that helicopter that Rick spotted way back in the first half of this season, and this time Jadis seemed to be expecting its arrival. We still have no clue what the deal is there, but it’s fun to speculate.