It’s a tough market, even for fire-breathing dragons.

Share prices for DreamWorks Animation Tuesday were flat, a day after tumbling more than 9 percent amid Wall Street’s disappointment about the weekend opening of the studio’s latest 3D animated film, “How to Train Your Dragon.” 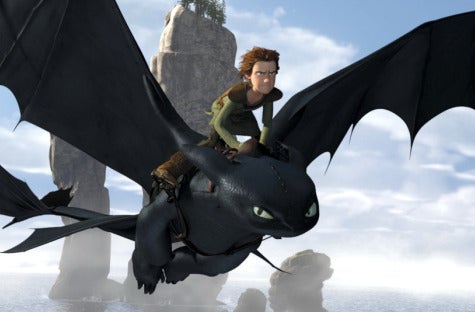 The opening could have been much worse. Amid soft pre-release tracking, DreamWorks and distributor Paramount had to fight to get the $165 million movie opened wide in 3D, with Disney holdover hit “Alice in Wonderland” competing for 3D screens and moviegoers.

“Right now, our best guess is that ‘Dragon’ will earn about $160 million in domestic box office and $270 million in international box office, implying a $120 million total box office shortfall vs. our pre-release estimate,” he added.

That pre-release estimate was based in part on the performance of DreamWorks’ “Monsters vs. Aliens,” which was released on the same end-of-March weekend last year and opened to $59.3 million, despite playing at a lot fewer 3D locations (1,149).

“Dragon,” however, faces a much more competitive market, with not only a still-potent “Alice” to contend with, but also Warner’s 3D-converted “Clash of the Titans,” which hits theaters Friday.

But there is hope among Paramount and DreamWorks officials that “Dragon” could make up for lost ground.

With a 97 percent “fresh” score on critics aggregator Rotten Tomatoes, it’s the best-reviewed movie so far this year. Word of mouth, meanwhile, yielded an “A” CinemaScore grade for the movie.

On Monday, with much of its youthful audience out of school for spring break, “Dragon” grossed $4.8 million in the U.S. and Canada, according to Paramount estimates. “Monsters vs. Aliens” grossed only $3.5 million on the comparable Monday in 2009, experiencing a much steeper drop from Sunday.

Going into the weekend, Paramount and DreamWorks have secured commitments of at least two weeks from all theaters booked for "Dragon," but the film is at risk of losing screens within locations to Warner’s "Titans."

"Dragons" is locked into 3D play at 185 IMAX locations through the end of April. These engagements contributed 11 percent of its domestic gross over the weekend.