(Warning: Spoilers ahead for the series finale of “WandaVision.”)

The Hex is down, and the people of Westview are free. And the situation with Vision is…complicated.

The Vision we’ve come to know and love — the sarcastic, the earnest, the, well, pink Vision — is gone. When Wanda finally pulled down the Hex, it erased him, and the twins, and the house that they lives in, from existence.

And the White Vision, built from Vision’s destroyed body by Hayward and  S.W.O.R.D., is still alive and well. And he’s very, very very confused.

Upon his entry into Westview, one thing becomes immediately clear: this Vision is not a friendly. He attacks Wanda immediately — acting according to, he says, his orders. Fortunately, the “real” Vision swoops in just in time to face down his doppleganger. And it turns out that’s who White Vision was truly looking for.

“My programming directive is to destroy the Vision,” he reveals in the library.

Of course, now we enter the metaphysics of identity. Using the concept of the Ship of Theseus — a thought experiment that raises the question of whether an object that’s had all of its components replaced is still fundamentally the same object — Vision convinces White Vision that his programming directive is a self-sabotaging one. Since the Westview Vision isn’t real, that would mean that this Anti-Vision’s true goal to destroy himself, since he’s literally in Vision’s body.

So Vision, always trying to be helpful, gives White Vision a gift. He calls it “data,” but it’s more than that. We see flashes of Vision’s history with Wanda. And then the glowing spot on his forehead where the Mind Stone used to sit turns from green to gold — the color of the stone. 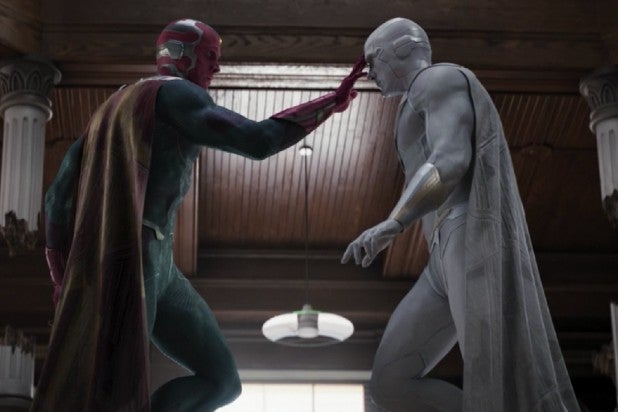 Upon this download or whatever it was, White Vision promptly flees, never to be seen again in the episode (not even in the mid- or post-credits scene).

So where does that leave him? It’s not clear.

There’s something Wanda says later in the “WandaVision” finale that gives us some key insight. At the end of the episode, just before he goes away, Wanda’s Vision asks what he actually is. And Wanda tells him that he’s essentially the manifestation of the piece of the Mind Stone that lives within her.

That’s a big statement! The Mind Stone no longer exists in the main reality of the MCU after Thanos destroyed all the present day versions of the stones in “Avengers: Endgame.” But apparently Wanda didn’t just receive power from the stone when she worked with Hydra — it gave her some of itself.

There is plenty of big picture stuff to ponder just with that bit of information, but that’s a discussion for another day. So for now let’s focus on how this potentially affects the events of “WandaVision” specifically, and White Vision.

Vision was originally born of a melding of Tony Stark’s AI Jarvis and the Mind Stone, which is itself a sentient being. In “Avengers: Infinity War,” Shuri in Wakanda tried to figure out a way to safely detach the stone from Vision without destroying his mind. She didn’t succeed in time, and Thanos killed Vision by violently yanking the stone out of his forehead.

When Vision touches White Vision’s head and turns his forehead gold, meanwhile, it seems like he’s doing the opposite. He’s returning the essence of the Mind Stone to his body.

In a way, he’s a lot like the “WandaVision” equivalent of Gamora, post-Endgame; new, but the same. But it’s not quite as simple as that.

The White Vision is different somehow, and not just Vision’s body without the stone. S.W.O.R.D. obviously did more than just repair the body and juice it up if he’s acting on a “programming directive.” And his voice, while still Paul Bettany’s, is deeper and generally more disconcerting than either Vision’s or Jarvis’s ever was.

Also Read: 'WandaVision': Aaron Taylor-Johnson is the Pietro Wanda Needed (and We Deserved)

So while we may recognize him as Vision, he’s also someone else entirely. He’s not just Vision reborn. We’ll have to wait and see what kind of person he’ll end up being. But it’s a good sign that he bailed on Westview after his enlightenment.

The question now is how and where White Vision will play a part in the MCU. Paul Bettany hasn’t been confirmed as part of any future Marvel projects, though that makes sense considering the mystery surrounding his fate in “WandaVision.” But in terms of story, he’s a wild card.

Thus far he’s only appeared in three “Avengers” movies, “Captain America: Civil War” and now “WandaVision.” There’s nowhere that’s an obvious spot for him to land in the MCU’s upcoming slate of movies and shows. Since Elizabeth Olsen and Scarlet Witch’s expected next appearance will be in “Doctor Strange in the Multiverse of Madness,” it’s possible he’ll resurface there. But even that doesn’t feel like a clean fit until we know more about what the film’s plot actually is.

That said, the White Vision of the comics, dubbed the Anti-Vision, is actually from a parallel version of Earth. The MCU typically adapts the comics on a very surface level, telling original stories while borrowing individual aesthetic and character bits all over the place. Involving the White Vision in multiverse drama would fit that mold, even though his origin is very different from the comic book version.

Someday we’ll find out more, but that day is not today. So sit tight.