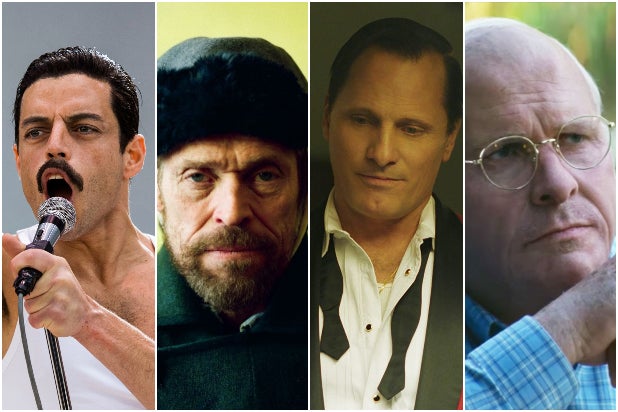 Rami Malek is widely considered the frontrunner to win the Best Actor Oscar for his performance as Freddie Mercury in “Bohemian Rhapsody” on Sunday night. But even if he doesn’t, there’s a good chance an actor from a biopic will win regardless.

That’s partly due to simple numbers. Four of the five nominees in this year’s Best Actor race come from biopics. with only one of them — Bradley Cooper for “A Star Is Born” — nominated for playing a fictional character. But this year’s lopsided representation of biopics among Best Actor nominees isn’t a rarity. Five times in the last 15 years, the same ratio of biopic-to-fictional character nominees has happened, four of those instances since 2013.

But even without superior numbers, the Best Actor category has come to be dominated by biopics. Six of the last eight Best Actor winners have all been from biopics, and so have 11 of the last 18. Overall, 26 performances from biopics have won the Oscar for Best Actor since the award was created, half of them since the 1990s. And for the first time in Oscars history, over the last decade the number of nominees for biopics have surpassed nominees who played original characters — a 23-22 split dating back to 2010.

Dennis Bingham, a film professor at Indiana University-Purdue University Indianapolis and the author of the book “Whose Lives Are They Anyway?,” identifies an important development in fostering the Academy’s love affair with biopics: the rise of actors striving for realistic, authentic portrayals of the real people they play.

This was first on display at the 1980 Oscars, when Robert De Niro won for playing Jake La Motta in “Raging Bull,” and Sissy Spacek won for playing Loretta Lynn in “Coal Miner’s Daughter.” But it was cemented later in the decade by the emergence of two actors whose careers are defined by acclaimed biopic performances: Daniel Day-Lewis and Meryl Streep.

“The acting is so visible,” Bingham said. “What they did was, especially Day-Lewis with ‘My Left Foot’ in 1989 and Streep in just about all of her films, is a highly embodied form of acting in that it would no longer do to have George C. Scott play Patton in his own voice.”

Ellen Cheshire, a British film writer and the author of the book “Biopics: A Life in Pictures,” identifies a surge of love for biopics from the Academy beginning in the mid-2000s, and says studios rushed to make biopics for the same reason they jumped at superhero films and franchises.

“People already know about these people, so there’s a built-in market of brand recognition. I think that always helps in terms of selling the film,” Cheshire said. “And if you can compare an actor against a real person, that always helps.”

The result has been more than one instance of competing biopics on the same subject. For instance, both Philip Seymour Hoffman and Toby Jones made Truman Capote stories in 2006, and Hoffman won for Best Actor that year.

Biopics also benefit from easy-to-explain, often highly inspirational narratives that make developing them an easy decision. “We get seduced by their storytelling,” Cheshire said. “They’re structured in such a way with the highs and lows, and quite often there’s periods of great triumph and redemption, whether it’s rags to riches or riches to rags.”

But if, as expected, a biopic actor takes home the Oscar on Sunday, will that translate to a Best Picture win? Based on history, probably not. While the Best Actor winner has matched the Best Picture winner at the Oscars 27 times, only five of those dual-wins were biopics: “A Man for All Seasons,” “Patton,” “Gandhi,” “Amadeus” and “The King’s Speech.”