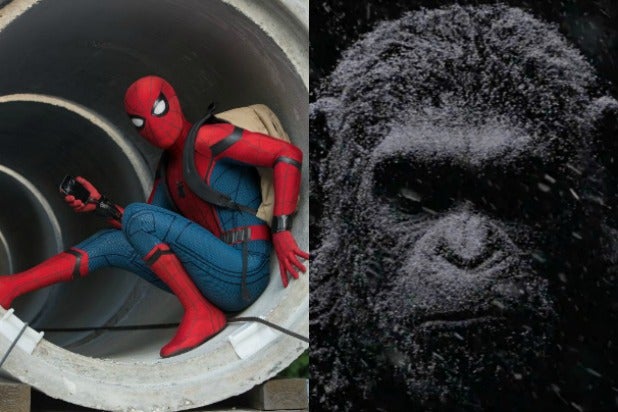 Columbia’s “Spider-Man: Homecoming” dominated the box office last weekend, as all other studios moved out of the way to avoid competing with the webslinger. But after Sony’s biggest opening in a decade with a $117 million start, this weekend will see the Marvel blockbuster go head-to-head with very tough competition in the form of Fox/Chernin Entertainment’s “War for the Planet of the Apes”

Also Read: 'War for the Planet of the Apes' Is 'What a Summer Movie Should Be,' Critics Say

It’s still possible that strong word-of-mouth could push “War” above the projection target, as critics have lavished the film with praise since advance screenings began nearly three weeks ago. The film currently has a Rotten Tomatoes rating of 92 percent, the highest for any “Planet of the Apes” film, including the 1968 original.

Should “War for the Planet of the Apes” earn an opening north of $60 million, “Spider-Man: Homecoming” will need a drop-off similar to the 43 percent posted by “Wonder Woman” to keep its hold on the number one spot. Marvel movie history is against that happening, as films with openings close to those of “Homecoming” like “Captain America: The Winter Soldier” ($95 million) and “Iron Man 2” ($128 million) had second weekend drop-offs of 55 and 59 percent, respectively. The other 2017 Marvel release, “Guardians of the Galaxy Vol. 2,” had a drop-off of 55 percent after its $146.5 million opening for a $65 million second frame in which it faced far weaker competition — “Snatched” and “King Arthur: Legend of the Sword” — than what “Homecoming” is facing.

Also Read: Why Matt Reeves Is a Better Fit to Direct 'The Batman' Than Affleck (Commentary)

Regardless of the result, comScore’s Paul Dergarabedian believes that it’s good news that the summer box office season finally has two critically praised blockbusters in theaters within a week of each other.

“We need some good news. We need the accolades not only going to the small screen but to the big screen as well, so bring on the two in a row,” he said. “We need that level of quality and competition out there instead of several weeks of new releases underperforming.”

“War for the Planet of the Apes” completes the tale of Caesar (Andy Serkis), the ape that leads his fellow sentient primates into a world where they have replaced humans as the dominant species. Forced to reluctantly lead his people into war against the humans after the events of the last film, the battle hits home for Caesar when his mate and child are killed by a raid led by a rogue colonel (Woody Harrelson). With the help of longtime companions Maurice and Rocket (Karin Konoval and Terry Notary), a hermit chimp named Bad Ape (Steve Zahn), and a mute human war orphan nicknamed Nova (Amiah Miller), Caesar embarks on a quest to defeat the colonel as the conflict between humans and apes reaches its climax.

“War for the Planet of the Apes” is directed by Matt Reeves, who co-wrote the script with Mark Bomback. Rick Jaffa and Amanda Silver, who wrote the first two installments of the reboot trilogy, produced the film with Peter Chernin and Dylan Clark.

Also releasing this weekend is Broad Green’s horror film “Wish Upon,” which stars Joey King as a teenager who discovers a box that grants the bearer any wish he or she desires, but at a grisly cost. The film is projected for a $8-10 million opening, with a release on approximately 2,100 screens. John R. Leonetti directed the film from a screenplay by Barbara Marshall, with Sherryl Clark as producer.

Finally, there is Amazon/Lionsgate’s “The Big Sick,” which is getting a wide release on approximately 2,500 screens after a limited run that earned the film $7.1 million from 326 screens. The film stars Kumail Nanjiani as a dramatized version of himself and recounts how he met his wife, Emily (played by Zoey Kazan), with whom he co-wrote the film. Directed by Michael Showalter and produced by Judd Apatow and Barry Mendel, the film was bought by Amazon Studios at Sundance for $12 million, with Lionsgate later joining as co-distributor. It has a 97 percent score on Rotten Tomatoes.