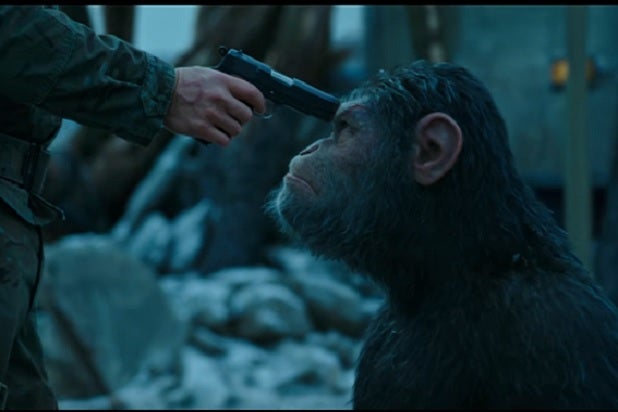 SPOILER WARNING: Do not read unless you have already seen “War for the Planet of the Apes”

When forming the epic conclusion to the “Planet of the Apes” reboot trilogy and deciding how to end Caesar’s journey from research facility captive to legendary ape liberator, writer Mark Bomback, along with director and writing partner Matt Reeves, took inspiration from a couple of classic films starring Charlton Heston.

And no, we’re not talking about the original 1968 “Planet of the Apes.” We’re talking about “Ben-Hur” and “The Ten Commandments,” a pair of epics starring Heston as Ben-Hur, a warrior on a quest for vengeance who ends up finding something even better at the end of his journey, and Moses, the legendary Old Testament liberator whose name lasts for millennia. In “War for the Planet of the Apes,” Caesar becomes a primate fusion of both of these icons, as his quest to avenge his wife and child’s death at the hands of Woody Harrelson’s ruthless human Colonel transforms into a mission that makes him the first famous historical figure of this ascendant civilization of apes.

In an interview with TheWrap, Bomback also spoke more about how these two Heston films, along with others like John Wayne’s “The Searchers,” inspired the arcs of other characters like the apes’ mute human ally, Nova, and the film’s comic relief character, Bad Ape. Read on to find out how the final chapter of Caesar’s tale was made, and how the original “Planet of the Apes” films were used to show how history repeats itself in ways one might not expect. The interview has been edited for clarity

Also Read: 'War for the Planet of the Apes' Star Andy Serkis to Awards Voters: I'm a Real Actor

When you finished “Dawn of the Planet of the Apes” three years ago, how much of the plot of “War” did you and Matt already have planned out?

We actually had next to nothing planned. We knew that we wanted to tell one more story that would bring us to some sense of a conclusion, but we had no idea what that conclusion looked like. So we took a break after “Dawn” and then reconvened and spent 2-3 weeks doing something people think screenwriters usually do but don’t often do: we just watched movies everyday.

We wanted this movie to resemble a biblical epic, but also maintain the western feel that “Dawn” started. And of course, we wanted to have a war movie, because the last film sent the message that we were headed toward a state of war. So we watched everything from “Bridge on the River Kwai” and “The Great Escape” to “Ben-Hur” and “The Ten Commandments.” We also saw “Spartacus” and “Braveheart” and “The Searchers,” too. And after every film we’d go to our office on the lot for a spitball session that was often colored by whatever we had just seen. We’d put together a wish list of all the things we wanted to see in the film, and almost miraculously that started to coalesce into a narrative. By the end, after organizing how each beat of the story would play out, we had the basic shell of the story.

Also Read: Why PETA Is So in Love With 'War For the Planet of the Apes'

The film starts with the humans and apes battling like the end of “Dawn” promised, but by the end it’s really about Caesar and the apes trying to survive while the humans are fighting each other. What led you to steer the conflict in that direction?

Well, we were interested in how the ’68 original has humans devolve into a simian state while apes become more sentient and articulate. So we realized that while “Rise” and “Dawn” show how this virus decimates humanity and gives apes their intelligence, we asked, “How did humans lose their speech”? So we started with the idea that the virus had mutated further and the idea that nature wasn’t done punishing humanity for breaking its laws.

From there we asked ourselves how humans might deal with this. Well, one way might be to try to tackle it in a scientific manner, but another might just be to chop off the arm before the infection spreads. Are humans becoming more ruthless in an attempt to save themselves than they have ever been before, and is this carrying over into how they’re dealing with the apes? So it started with that one idea with the virus and the one little girl and sort of expanded into the idea that the Colonel is fighting a battle on two fronts, with both the Apes and humans who disagree with how he’s dealing with this virus.

Also Read: 'War for the Planet of the Apes' Review: Simian Saga Sewn Up Satisfactorily

Speaking of the little girl, the introduction of Nova really raised a lot of eyebrows among fans of the original film. Did you and Matt discuss how much you wanted to connect this trilogy to the originals?

The name Nova came up after we came up with the idea for the character. When we were first spitballing, I was interested in this idea of a reverse “Jungle Book,” where a girl who is sort of primitive  is raised among more evolved apes. Matt was really interested in this idea we got from “The Searchers,” where Natalie Wood plays this white girl who was raised by Native Americans and John Wayne sets out to recover her.

I don’t remember exactly how it came up, but during one of our spitball sessions we realized, “Hey! Bad Ape has all these trinkets. What if one of them is the word ‘Nova’ and we can call her ‘Nova’?” We loved the idea she was called that, but it never was meant to be that she was the ancestor of the Nova in the ’68 film or that she’s going to grow up to be that character. It was more that we wanted to convey the idea that history is unwittingly cyclical.

It’s like how the Colonel’s soldiers call themselves “The Alpha and the Omega” and hundreds of years later, a group of humans that survived in “Beneath the Planet of the Apes” [the 1970 sequel] call their cult surrounding a nuclear bomb “Alpha and Omega.” Even the crosses on which the Apes are tortured by the Colonel’s men are similar to how the apes torture humans in the ’68 original. So Nova’s name is more about this unwitting pattern that keeps repeating through history.

Also Read: 'War for the Planet of the Apes' Is 'What a Summer Movie Should Be,' Critics Say

Each of the three films in this trilogy has a human who sympathizes with the Apes — Will, Malcolm, and Nova — how important was it that you have these characters included in the story?

Well, it’s interesting because while Will and Malcolm want to assist the apes, with Nova it’s different. Caesar for a long time has had a genuine empathy for humans, even the ones who raised him. But the events in the beginning of “War” finally cause him to abandon that and reach the state that Koba was in at the previous film, where he finally decides they’re not worth saving. Nova was our way of having Caesar pull back from that state. He’s reluctant to bond with her, but being with her over time reminds him that humans are worth saving even if the vast majority of the ones that are left want to destroy him.

Bad Ape brings a lot of levity to the film, yet Caesar remains the film’s main focus. What gave you the idea to add that comic relief into the film, and did you have any trouble balancing his presence with the need to keep the main focus on Caesar?

Bad Ape evolved from a scene in “Ben-Hur” where there’s a colony of lepers that Ben-Hur encounters quite late in the film, so we thought, “Maybe there’s a colony of people who are suffering from the virus who are mute.” We didn’t end up using that final idea, but it did lead to another idea of, “Well, maybe there’s an ape that’s a scavenger in this community.”

Then we started running with that idea and it really started cracking us up as we realized that he would have learned all his language from captivity in a human zoo. So he would have thought of himself as “Bad Ape” as he was being scolded, and then we saw that there was also shades of tragedy within that. But we really want to try to get some new characters into this trilogy and find a way to add some humor to a very dark story, sort of like how Yoda adds lighter moments to “The Empire Strikes Back” without being cute.

We never had trouble balancing him with the rest of the plot because he was such a pleasure to write. We always had this gut instinct about when we wanted to check back in with him and have him relieve some of the tension without it feeling silly but rather because of his innocence, his hopefulness, and his anxiety given the situation they’re in.

“Dawn” and “War” are both very bleak films, but they also seem to have moments of hope and kinship that the original “Apes” films often didn’t have. What sort of reception have you received from “Apes” fans, and are you surprised that such a large summer blockbuster audience has been willing to take this dark journey with you?

To be honest, we aren’t thinking that much about the tone and content of the originals. We see our story starting with “Rise” and will eventually end where the originals were, but I think our DNA comes a lot more from “Rise” and “Dawn” than from the originals. And yes, I’m sure the intensity of this film and how seriously we treat some of these moments is not for everyone, but that’s the reason Matt and I feel so blessed to work on these films because we get to treat them so seriously  and treat it as an intense drama on a scale that we wouldn’t be able to do if it was just humans. We were allowed a certain liberty because these films have apes and are sort of a spectacle.

But we’re really grateful that people have embraced the story that we’ve chosen. I was listening to an interview that Matt gave a few days ago, and he mentioned how Pixar and a bunch of blockbusters have spectacle to them. Our spectacle is the notion that you’re going to emotionally identify with a CG character, and to me that’s the most rewarding kind of spectacle there is. We’re using technology as a storytelling tool and a way to remind us of what it means to be a human being on this Earth.

It’s hard to have perspective on your own films as to whether you’d be a fan of them, but my gut tells me I’d love these films even if I didn’t work on them. I did work a little bit on “Rise,” and back then Rick [Jaffa] and Amanda [Silver] had written a great script, but they wanted another writer in the room. And I saw their script and I thought, “This is the greatest hour-and-a-half pilot episode I have ever read!” So it was a privilege to even enter this universe having been a fan of “Rise” like Matt is, and to work with Matt on his incredible vision.

Superhero movies are the top performers at the box office. With Comic-Con 2017 upon us, let's take a look at what should be in store inside Hall H in San Diego, Calif.