Critics throw the term "soulless corporate filmmaking" around with abandon, but movies like "Warcraft" really manage to redefine the term. A film adaptation of the hugely popular MMORPG (that's Massively Multiplayer Online Role Playing Game), this latest video game adaptation ranks near the bottom of the deadly genre. Imagine "Battlefield Earth" without the verve, or the unintentional comedy, and you've got "Warcraft."

With his first two films, "Moon" and "Source Code," director Duncan Jones took high-concept science-fiction stories and spun them into taut tales that never lost sight of their characters or the toll of the extraordinary circumstances in which they'd been placed. This time around, sharing screenplay credit with Charles Leavitt ("In the Heart of the Sea") -- based on story and characters by Chris Metzen -- he's trying to wrestle with too many characters and locations and motivations and subplots, all in a movie that's clearly intended to be but the first of many.

Also Read: 25 Movie Stars Who Were Completely Transformed by Makeup or CGI for a Role (Photos)

The result is a monument to excess, both narratively and in the ubiquity of the visual effects. Unlike, say, "The Jungle Book," which was entirely artificial yet came off as completely organic, it's hard to lose sight of the green-screens here, especially when the warlike Orc characters, who boast some of the least expressive character design since the aliens in "John Carter," stand next to the film's human beings.

Those two species wind up side-by-side when the Orc wizard Gul'dan (voiced by Daniel Wu, "Into the Badlands") opens up a portal between their world and the magical kingdom of Azeroth, ruled over by King Llane and Lady Taria (Dominic Cooper and Ruth Negga, coincidentally also co-starring in "Preacher"). Lady Taria's brother Anduin Lothar (Travis Fimmel, "Maggie's Plan") is one of Azeroth's great warriors, although he wishes his young son weren't following in his footsteps. 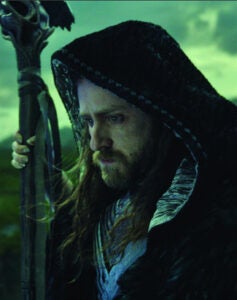 And then there's Medivh (Ben Foster), a powerful wizard who is the Guardian of Azeroth, although young mage Khadgar (Ben Schnetzer, "Pride") suspects that something is amiss amidst the Jedi ... or rather, the Kirin Tor, the secret society of magic that protects the kingdom. On the other side, we have the mighty Durotan (voiced by Toby Kebbell, "Fantastic Four"), a deadly Orc warrior who is nonetheless a creature of principle, making his way through the portal with his pregnant wife Draka (Anna Galvin, "Smallville"), as well as human-Orc half-breed Garona (Paula Patton), whose alliances aren't necessarily fixed.

There's a lot of running around and yelling and scheming and go-to-the-place-and-get-the-thing-ing, but none of it is particularly entertaining; like most movie versions of games, it will no doubt leave fans of the original wishing they were in charge. For the rest of us, there's not even that sense of fun that comes from the sort of film that plays like a small child dumping all his action figures out on the living room carpet to battle each other.

A good chunk of the disconnect can be attributed to cinematographer Simon Duggan ("The Great Gatsby"), who makes every location in "Warcraft" -- from the king's stately castle to the Orc forests to Medivh's magical lair -- look fairly artificial. Even if this was an attempt to emulate the online game, the big-screen results offer no visual pleasure. And the generically percussive action score composed by Ramin Djawadi ("Game of Thrones") doesn't help much either.

The cast seems mostly adrift, with only Schnetzer giving what might be considered an actual performance. The usually reliable Foster is reduced to gadding about like a prog-rock Jesus in a series of robes that make him look like he's posing for the side of someone's van, and poor Paula Patton gets saddled with a sad pair of novelty-store fangs. (To her credit, she makes the green body makeup work; if the Marvel Cinematic Universe ever expands to include superhero-with-a-law-degree She-Hulk, we're looking at a real contender here.)

"Warcraft" promises, or threatens, sequels, but then so did "Super Mario Bros." And come to think of it, if forced to watch either of these video-game movies a second time, I'd probably vote for the plumbers.