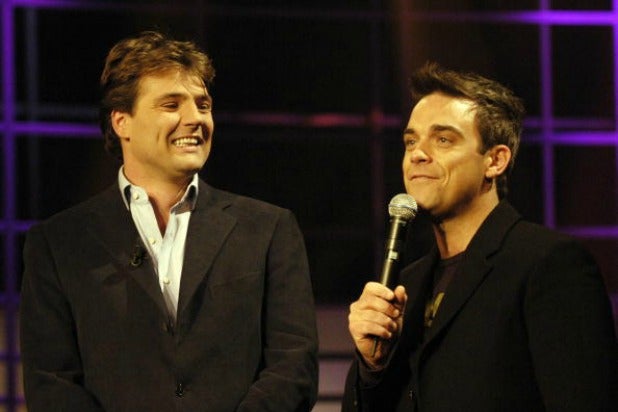 Warner Bros. Television Group has entered into an agreement to acquire all Eyeworks’ businesses outside the US, in 15 countries across Europe, South America, Australia and New Zealand.

Reinout Oerlemans (pictured, left, with Robbie Williams) will step down as CEO of Eyeworks and become the new chairman of Eyeworks USA.

Founded in 2001 in The Netherlands by Oerlemans, Eyeworks is an international independent producer and distributor of scripted and non-scripted content in 150 countries. Its shows include “Celebrity Splash!,” “Test the Nation” and “Extreme Makeover: Weight Loss Edition.”

The purchase follows the 2010 acquisition of Shed Media, one of the leading production companies in the UK, and the 2011 acquisition of BlazHoffski in The Netherlands and Belgium.

“It’s fair to say that it got me thinking when Warner Bros. showed the strong interest in Eyeworks,” Oerlemans said. “For Eyeworks, this is a defining step towards our ongoing objective to be a major player in content production around the globe. I realize this is the end of an era, because I will no longer be the CEO of the Group, after an amazing period of 12.5 years since I’ve built the company from scratch together with Ronald van Wechem and Robert van den Bogaard. Together with CFO Jan Peter Kerstens we have created Eyeworks as what it is today: a creative and versatile content company, operating as a tight knit web around the world. I know Ronald Goes will be a tremendous leader for this fantastic group of talented people going forward.”

The acquisition is expected to be completed this year, pending regulatory approvals.