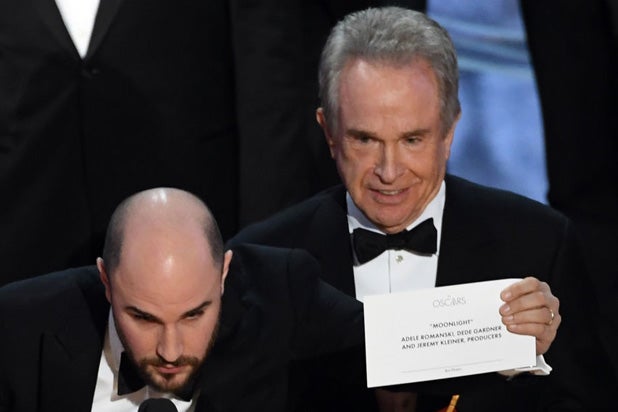 Warren Beatty, who found himself at the center of Sunday night’s Best Picture mix-up at the Academy Awards, released a statement on Tuesday asking Academy of Motion Picture Arts and Sciences President Cheryl Boone Isaacs to personally explain what happened at the end of Sunday night’s show.

In the statement given to the Associated Press, Beatty said that he would not comment further on the incident and suggested that Isaacs “publicly clarify what happened as soon as possible.”

On Monday evening, the Academy released a statement apologizing to Beatty, the viewers, and the casts and crews of “La La Land” and “Moonlight” for the envelope error that led to “La La Land” accidentally and mistakenly being announced by Beatty and Faye Dunaway as Best Picture, only for the producers of the musical to discover when they got on stage that “Moonlight” was the actual winner.

“We deeply regret the mistakes that were made during the presentation of the best picture category during last night’s Oscar ceremony,” the Academy’s statement read. “We apologize to the entire cast and crew of ‘La La Land’ and ‘Moonlight’ whose experience was profoundly altered by this error. We salute the tremendous grace they displayed under the circumstances. To all involved — including our presenters Warren Beatty and Faye Dunaway, the filmmakers, and our fans watching worldwide — we apologize.”

PwC, the accounting firm responsible for the balloting process and delivering the winners’ envelopes during the show, also released a statement on Monday with a more in-depth explanation of what went wrong.

The statement place the blame on PwC accountant Brian Cullinan, who inadvertently handed Beatty and Dunaway a duplicate envelope for the Best Actress category — which was won by “La La Land” star Emma Stone — instead of the envelope for Best Picture.

Cullinan and his PwC partner, Martha Ruiz, each brought a briefcase containing an envelope for all 24 categories to the event. Each category has two copies of the envelope so that one can easily be handed to the presenters regardless of which side of the stage they enter from.

Just prior to the Best Picture award being presented, Cullinan had taken a picture of Emma Stone walking off the stage with her Oscar and posted it to Twitter. That picture has since been deleted. Neither the Academy nor PwC has commented on whether Cullinan’s picture played a role in issueing the wrong envelope to Beatty and Dunaway.

The Academy said Monday that it was “investigating the circumstances” and “will determine what actions are appropriate going forward.”