Warren Beatty returned to center stage at the Dolby Theatre on Thursday night for the the first time since he memorably flubbed the Best Picture presentation at the Oscars in February.

The event: AFI’s Life Achievement Award presentation to Diane Keaton, whom Beatty directed and co-starred with in the 1981 period drama “Reds.”

Beatty did not acknowledge or reference the “Oscars flub” in his brief two and a half minutes on stage, where he appeared solo. 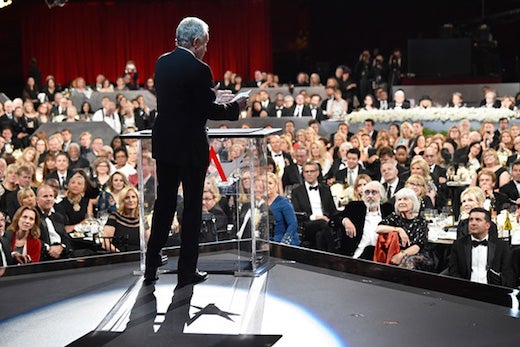 Warren Beatty returns to the scene of the Oscar fiasco, again facing a crowd of the most influential people in the film industry at the AFI Life Achievement Award. (Getty Images)

“You know there’s so much I could say about Diane and so much has been said already,” he began, acknowledging the prior remarks from Reese Witherspoon, Rachel McAdams, and a comedy monologue from Steve Martin and Martin Short.

Emma Stone — the “La La Land” star whose name appeared on the infamous envelope on Oscar night — was seated at one of the front tables feet away from Beatty. Top gun awards campaign manager Lisa Taback, who worked on both “La La Land” and actual Best Picture winner “Moonlight,” was also in the room. 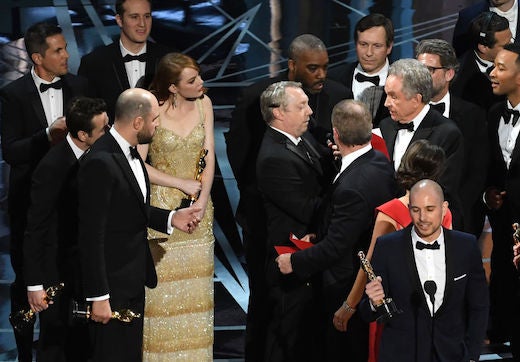 Flashback to February 26, 2017: Emma Stone glares near Warren Beatty during the unraveling of the Best Picture mistake. (Kevin Winter/Getty Images) 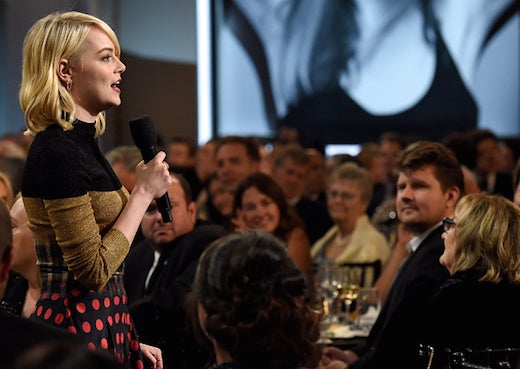 Thursday marked Beatty’s first time back in that spotlight since his involvement in the envelope fiasco that saw him and co-presenter Faye Dunaway mistakenly present the Best Picture Oscar to “La La Land” instead of “Moonlight” to end the Academy Awards on February 26.

Also Read: 8 Things to Know About the Accountant Behind the Oscars Envelope Snafu (Photos) 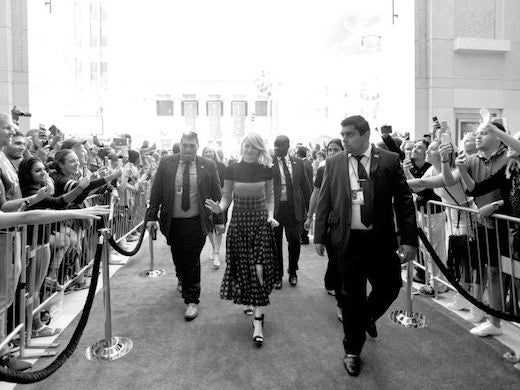 Fans greet Stone on the way in to the Dolby Theatre. (Charley Gallay/Getty Images)

Beatty has kept a low profile since Oscars night.  His one outing? A visit to a London play in April, per a search of recently photographed public celebrity events.

Jane Fonda, Morgan Freeman, Rachel McAdams, Sarah Silverman, and Woody Allen (making a shock appearance to roast his “Annie Hall” co-star) made comical tributes to Keaton and her work as the star of “The Godfather” and “Father of the Bride” franchises.

The industry-heavy crowd also included studio heads, producers, and a slew of top talent like Al Pacino and Meryl Streep.

Watch Beatty’s return to the scene of the crime on the special “AFI Life Achievement Award: A Tribute to Diane Keaton” that premieres on TNT on June 15, at 10 p.m. ET/PT.