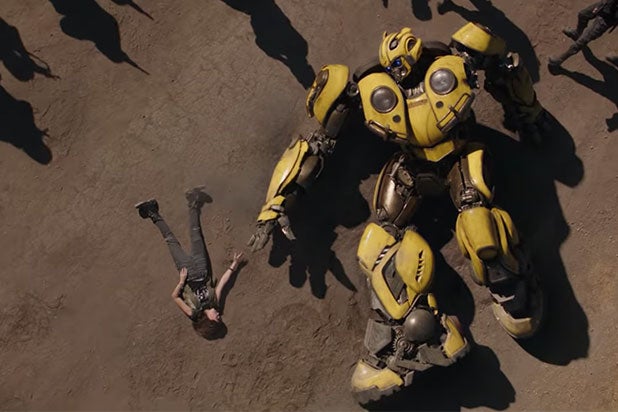 For seven years, “Transformers” was the ultimate critic-proof franchise. Reviews for films like “Revenge of the Fallen” and “Dark of the Moon” were overwhelmingly negative, but fans and families showed up in droves every summer that one of these films came out, to the tune of over $1 billion each.

But these days, “Transformers” doesn’t hold the sway over audiences — at least those in the United States — that it once had, and the most recent installment, “Bumblebee,” doesn’t seem to have changed its box office fortunes.

Instead, we are seeing somewhat of the opposite of Optimus Prime’s heyday: “Bumblebee” has earned a franchise-best 93 percent score on Rotten Tomatoes, yet through three weekends this holiday season it had only racked up a domestic total of $97 million, crossing $100 million on Tuesday.

That is approximately 15 percent behind the pace of “Transformers: The Last Knight,” which made a franchise-low $130 million domestically in summer 2017.

It’s a hard end to what was a somewhat hopeful 2018 for Paramount, as the success of “A Quiet Place” and “Mission: Impossible-Fallout” served as the first signs of a potential box office turn around under CEO Jim Gianopulos.

But revitalizing “Transformers” as a reliable tentpole franchise was key to that recovery, and Exhibitor Relations analyst Jeff Bock thinks that the studio may have made a big mistake by releasing the film at Christmas against two other films that appeal to the movie’s core audience: “Aquaman” and “Spider-Man: Into the Spider-Verse.”

“There was a lot of demographic splitting that really worked against ‘Bumblebee,'” Bock told TheWrap. “‘Spider-Verse’ was another film that really did well with both critics and audiences, and ‘Aquaman’ still has that can’t-miss status with DC fans that led to a big opening weekend and strong word-of-mouth that made it the most popular choice.”

Meanwhile, less than 5 percent of the audience for “Aquaman” and “Spider-Verse” have also gone to see “Bumblebee.” Movio also found that amongst moviegoers age 22-29, “Bumblebee” underperformed not only compared to its main competitors but also compared to “The Last Knight,” meaning that families were providing more of its turnout this year than the 18-35 demographic that once showed up to “Transformers” films in the past.

And competition might not be the only factor. Bock suggests that despite the unprecedented critical praise for this spinoff, the franchise fatigue felt towards “Transformers” just might be too much for “Bumblebee” to overcome.

“People have a certain image of what a ‘Transformers’ movie is from all the Michael Bay films over the last decade, and that can be hard to turn around with just one movie,” Bock said.

There are still some positives, though. Paramount Domestic Distribution President Kyle Davies notes that “Bumblebee” was made on a much cheaper budget than past “Transformers” films. “The Last Knight,” which grossed $605 million worldwide, had a budget of $217 million and was reported by some outlets to have cost even more. But “Bumblebee” has been reported to have a budget of $125 million, thrifty by tentpole standards. Regardless of what the final box office count is compared to past “Transformers” sequels, “Bumblebee” still has a lower threshold to profitability.

And even if there isn’t a rebound in the box office receipts, it doesn’t mean that “Bumblebee” can’t still renew interest in “Transformers” long-term. Word-of-mouth for the film could still spread even after the film leaves theaters and heads to home release.

Director Travis Knight, who has earned critical acclaim for animated films like “Kubo and the Two Strings,” won over critics by balancing the franchise’s trademark action with a heartfelt plot. While future installments aren’t currently on the studio slate — “Transformers 7” was taken off last May — Bock and other box office analysts say that they expect the Autobots to return. If Paramount continues to follow Knight’s path, audiences could still come around in much the same way they have to “Mission: Impossible,” which has remained consistent at the box office since its launch in 1996.

“Having a quality movie and that positive word of mouth has an evergreen benefit to it,” Davies said. “That’s what we needed. We needed a film that regained the pedigree of the original ‘Transformers.’ Whether they see it on opening day or some other time, that’s what matters.”