Sonmez is suing for discrimination she said she experienced after revealing she is a sexual assault survivor. Baron retired from his role in February, but under his leadership, Sonmez was banned from covering stories that involve sexual assault. In March, she announced on Twitter — after colleagues rallied around her — that the ban, which impacted her ability to cover #MeToo and the allegations that surfaced against Supreme Court Justice Brett Kavanaugh during his confirmation process, had been lifted.

“I’m not planning on going anywhere. The Washington Post needs to do better. I just want to do my job,” Sonmez tweeted the day before saying the ban was lifted, tagging editors Steven Ginsberg, Cameron Barr, Lori Montgomery and Peter Wallsten. Ginsberg, Barr and Montgomery were named in Thursday’s suit, as was managing editor Tracy Grant. 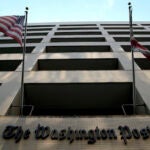 In her lawsuit Thursday, first reported by CNN, Sonmez said that because of the ban, she experienced “economic loss, humiliation, embarrassment, mental and emotional distress, and the deprivation of her rights to equal employment opportunities.”

She told CNN that “survivors of trauma, including sexual assault, deserve the full support of their newsrooms.” She added, “They should never have to fear that they will be punished, silenced or barred from doing their jobs because of what was done to them.”

The complaint said Sonmez experienced depression, anxiety and physical pain as a result of what happened.