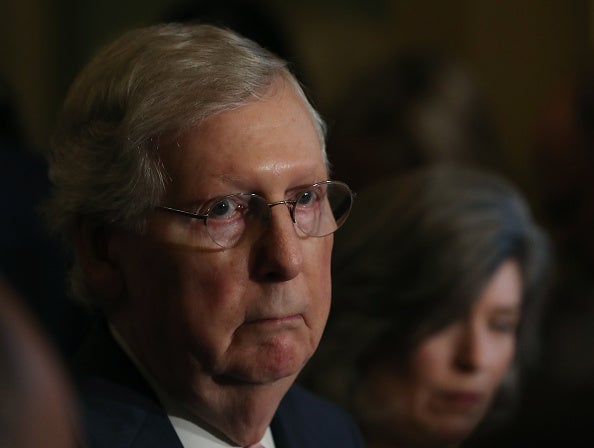 The Washington Post’s Wednesday editorial takes up a full page in its plea to Senate Majority Leader Mitch McConnell to “do something” about gun safety.

Much of that page is a list of hundreds of names of victims of mass shootings in America, beginning with the 13 who died in the Columbine High School massacre in 2000.

The rest is made up of a few paragraphs asking, “What if there was a mass shooting in the United States not once or twice or four or six times monthly, but every single day, a big one, the kind that electrifies social media and squats for days on Page 1 — would that be enough to move Senate Majority Leader Mitch McConnell from his insistent inertia on gun safety? Would any volume of bloodshed convince the Kentucky Republican that Congress faces a moral imperative to act?”

The Post’s appeal to McConnell comes after a mass shooting that killed seven in Texas over the weekend, just weeks after two mass shootings took place in a single weekend in early August.

Earlier on Tuesday, the Post reported that McConnell remained “noncommittal” about bringing new gun safety legislation to a vote in the Senate during a Tuesday radio interview with Hugh Hewitt.

“The list below, far from comprehensive, is tragic, in part, because it is so far from inevitable. No, no single law would end gun violence. But there are reasonable, obvious measures that would help,” the editorial said.

“For example: Ban the sale of military-grade assault weapons. Unneeded by civilians, they are a blight on the nation, their ready availability a national disgrace. Eliminating them would slow the growth of this list. It would save lives,” it continued.

Representatives for the senator did not immediately respond to a request for comment.