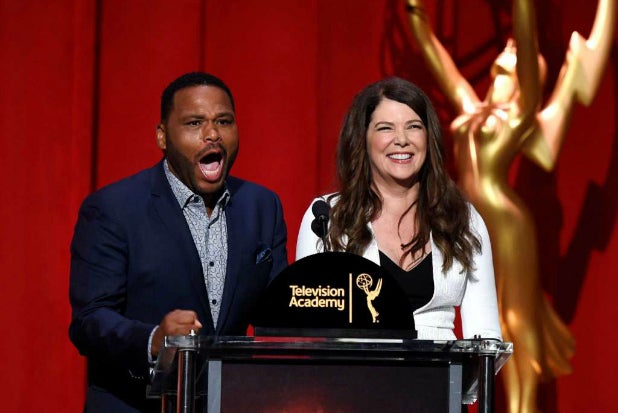 Last year, we didn’t get to see Anthony Anderson‘s reaction to getting an Emmy nomination for the first season of ABC’s “Black-ish” — because he was in London’s Heathrow Airport at the time. But since he presented the Emmy nominations with “Gilmore Girls” star Lauren Graham live Thursday morning, we were treated to his perfect response to his second nomination.

Anderson exploded with joy when he was named for the second straight year as a nominee for lead actor in a comedy. He blew up again when his co-star Tracee Ellis Ross, was nominated, and again the show scored a nomination for Outstanding Comedy Series.

By the time Television Academy chairman & CEO Bruce Rosenblum had moved on to the Outstanding Drama Series category, Anderson refused to be limited to the comedy categories. Just before Rosenblum announced the final nominee, Anderson stage-whispered to him, “Say ‘Black-ish.'”

So could this be the year for “Black-ish?” Anderson is coming off a very strong second season, the highlight of which was a stunning, laughter-free monologue that Anderson’s character, Dre, delivers about police brutality.

He struggles with what to tell his children about how to deal with police. It was one of the most moving moments on television this year, and one of the most serious discussions of race. Not bad for a comedy show.

But Thursday was all about celebration. Here’s our supercut of Anthony Anderson‘s reactions: