This one got us. During a memorial for DMX on Saturday, one of the late rapper’s young children took the stage and performed a song of her own that we’re pretty sure would’ve made her father proud.

Even better… she apparently wrote it herself. “I’m growing, I’m learning to hold my head, my daddy’s still holding my hand so I gotta stand up,” she rapped confidently. See some of it below (which appears to mimic DMX’s “Slippin'”):

DMX aka Earl Simmons died earlier this month at the age of 50, six days after suffering a heart attack. 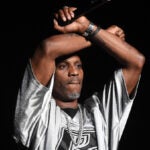 Saturday’s Celebration of Life event, which was streamed on DMX’s YouTube channel, was limited to just friends and family due to New York’s COVID-19 protocols. In attendance were his 15 children and their mothers, as well as fiancée Desiree Lindstrom and ex-wife Tashera Simmons.

The family will hold a private funeral on Sunday.

A new song performed by DMX was released one week after his death off the soundtrack for Epix drama series “Godfather of Harlem.”

Readers can listen to the posthumously released DMX song, “Been to War” by clicking here.

Produced by Epic Records, a division of Sony Music Entertainment, the track is one of from the second season of the Forest Whitaker-led “Godfather of Harlem,” which premieres Sunday on Epix. The show stars Whitaker as the infamous ’60s crime boss Bumpy Johnson.