‘Hillbilly Elegy’ Author J.D. Vance announced on Thursday that he is running for the U.S. Senate in Ohio. But he’s probably hoping his campaign doesn’t go the way his campaign announcement went.

Vance, who occasionally appears on Fox News, wrote the memoir that questions whether poor Americans like those in Appalachia are responsible for their own circumstances, and rose to fame in 2016 in part by loudly opposing Donald Trump only to ultimately embrace Trump and almost all of his positions.

Indeed after announcing his decision to enter the Republican primary in 2022, his opponents began pointing out his previous opposition to Trump. But that’s not why we’re here. 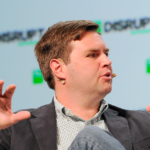 To recap: His sign fell off right before he could explain what the sign was for. Next time, maybe use glue.