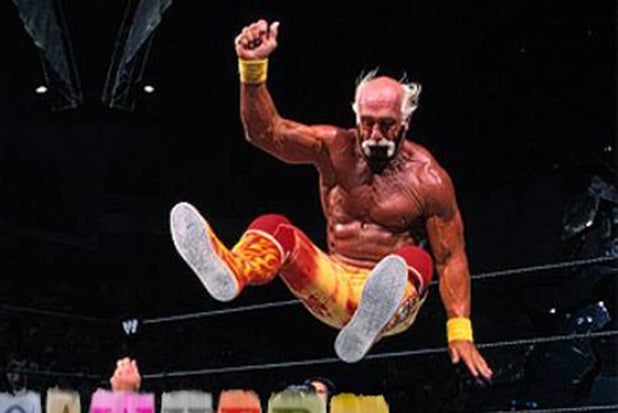 Hulk Hogan is officially back in sports entertainment, and the “Crown Jewel” host just welcomed the WWE Universe to Saudi Arabia on Friday.

Watch the Hulkster cut a promo to open the controversial pay-per-view:

Well let me tell you something, BROTHER….@HulkHogan is in the house, and he's hosting #WWECrownJewel! pic.twitter.com/XRSEbW7eRc

And here is more of his arrival:

Plus, a pretty good photo op for those ringside:

WATCHA GONNA DO when HULKAMANIA and #WWECrownJewel RUN WILD ON YOU?! pic.twitter.com/nulkYlJ7rk

Hogan, whose real name is Terry Bollea, was booted from WWE after video of him using the N-word surfaced in 2015.

He was reinstated with the organization in June 2018. Hogan apologized to the locker room at the time.

“Crown Jewel” in Saudi Arabia almost didn’t happen for Hulk or anybody. On Oct. 11, a spokesman for the professional wrestling promotion told TheWrap that they are “currently monitoring the situation” in Saudi Arabia.

The brief statement was WWE’s first acknowledgment of the circumstances surrounding deceased Washington Post columnist Jamal Khashoggi, a Saudi Arabia native who had been critical of the country’s royal regime. U.S. and Turkish officials both believed that Khashoggi may have been murdered by his own government, or that he was killed with Saudi Crown Prince Mohammed bin Salman’s knowledge. At the time, Khashoggi had been missing for more than a week after going to the Saudi consulate in Istanbul to obtain wedding papers.

Saudi officials now acknowledge his murder and have admitted that it was possibly premeditated. As the news of the horror progressed, it became less likely that WWE would go ahead with event in Saudi Arabia.

“Crown Jewel” is the latest in WWE’s massive push into expansion in the oil-rich nation. Today’s event follows April’s “Greatest Royal Rumble” event, which took place at the King Abdullah Sports City Stadium in the Saudi city of Jeddah.