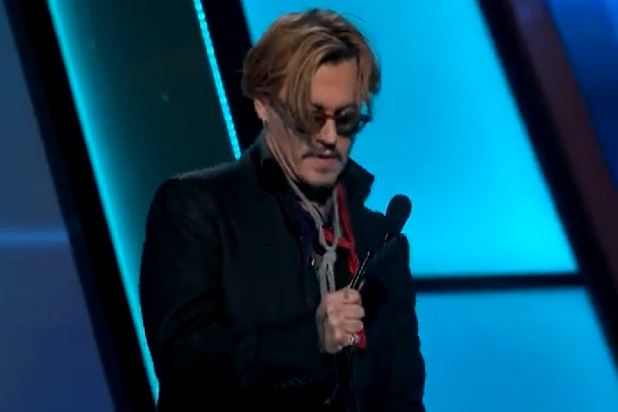 If Friday night’s Hollywood Film Awards had a Most Noteworthy Speech category, Johnny Depp would certainly have walked away with the trophy.

While the inaugural telecast for the awards show yielded meager ratings for CBS, it was definitely a bigger hit on social media, thanks to “Alice in Wonderland” star Depp’s bizarre speech during Friday night’s festivities.

Presenting the Hollywood Documentary Award for “Supermensch: The Legend of Shep Gordon,” Depp raised eyebrows with his presentation. Unsteady on his feet, he slurred his way through an introduction of Gordon, starting out with the observation, “That’s the weirdest microphone I’ve ever seen in my life.

“I’m not very good at this sort of thing,” Depp admitted during the speech, which was bleeped on numerous occasions.

“I mean, it’s one of those nights,” Depp later offered by way of apparent explanation.

Twitter was quick to respond to Depp’s woozy appearance, with a number of users likening the actor to his “Pirates of the Caribbean” character, swashbuckler Captain Jack Sparrow.

“Way to go, Johnny Depp. We totally couldn’t tell you were smashed,” another Twitter wag chimed in.

Elaine L., of the website Lainey Gossip, expressed concern for the actor amid the jabs and jeers.

“Don’t know if I should be worried about or embarrassed for Johnny Depp at the Hollywood Film Awards,” she wrote.

A spokesperson for the actor has not yet responded to TheWrap‘s request for comment.

In case you missed it, watch Depp’s speech below.