Maybe Mandy Patinkin’s more of a Marvel guy? The celebrated star of stage and screen tweeted a video Saturday in which he and wife Kathryn Grody attempt to guess which actors have donned the cape and cowl, the operative word being “attempt.”

In the video, Patinkin’s son, serving as both cameraman and game show host, gives his parents a seemingly simple challenge: name five actors who have played Batman.

Contrary to the confidence with which he said it, the “Homeland” star was presumably thinking of Adam West, the who starred in the campy 1960s “Batman” series. However, Adam Beach is a Canadian actor known for his work on “Law & Order: SVU”.

Patinkin seems to sense that he is wrong, modifying his final answer to “Adam something…”

Grody gets a little closer.

“The great actor that played Chaplin,” she guesses, “You know his father gave him f–king marijuana as a kid, he has a lot of issues.”

To her credit, Batman and Iron Man’s names are only a few letters off from each other. But alas, Robert Downey Jr. has never played the Caped Crusader.

Then Patinkin thinks he has something, attempting to recall the name of his “favorite actor guy.” 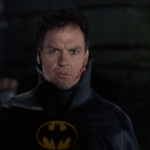 Next Grody starts spitballing a number of actors’ names who have definitely not played Batman (yet) including: Clint Eastwood, Daniel Day Lewis, Anthony Hopkins and Kenneth Branagh.

As Patinkin continues to search his mind for this “favorite actor,” Grody takes a timeout to apologize for her memory saying, “This is horrible and it’s humiliating and you’re not allowed to post any of this stuff,” vowing to pick up Spanish as a way to exercise her brain.

“Is he skinny?” their son asks, “Yeah,” agrees Patinkin, who then clarifies that this mystery man can also be fat when he needs to be. 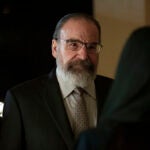 Grody throws out “Benedict Cumberbunch” to no avail.

Seeing how close his father is to the words, Christian Bale, the son begins to throw out hints like, “It rhymes with Fish Bin Kale…Kiss Him Stale.”

“I love you Christian Bale!” Patinkin bellows, erupting into applause, “You were on the tip of my tongue every f–king minute! He is the greatest actor! God forgive me for not remembering your name! I remembered your soul.”