The sixth season of “The Masked Singer” hits its most dramatic point so far this week with the Group B finals: An episode that will determine who appears in the Season 6 finale alongside Group A winner Bull.

While we don’t have the answer to that question just yet, TheWrap does have an exclusive sneak peek at the start of Wednesday’s episode, which could give you some indication of whether the Queen of Hearts contestant or the two celebs competing as Banana Split are going to come out on top Wednesday night.

In the video, which you can view above, you’ll see a brief recap of “The Masked Singer” Season 6 journey so far, and what’s led us to this final showdown between Queen of Hearts and Banana Split. Then, glimpses of the performances these two contestants — but three celebrities! — will give tonight as their last go-round before one more elimination. 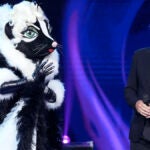 During the episode, you’ll see “The Masked Singer” judge Robin Thicke do a duet with Banana Split, and Nicole Scherzinger sing with Queen of Hearts, marking the first time the panelists have ever performed on the show.

Bull was the one who made it to the end of that show, and on to the Season 6 finale, while Skunk was cut and unmasked as Faith Evans. 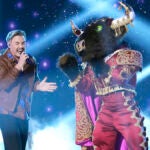 The final two singers from “Group B” perform solo, and then with celebrity duet partners and show panelists Nicole Scherzinger and Robin Thicke, before one is unmasked and sent home. Play along with panelists Ken Jeong, Jenny McCarthy, Nicole Scherzinger and Robin Thicke breaking down all the clues on America’s favorite guessing game. The Season Six contestants boast a combined 85 Grammy Nominations and 27 wins, three Academy Award nominations, 12 Emmy Nominations, 12 Razzie Award Nominations, two Super Bowl appearances and two Lifetime Achievement Awards. Find out which of the two singers will advance to the showdown finale in the all-new “Group B Finale” episode.