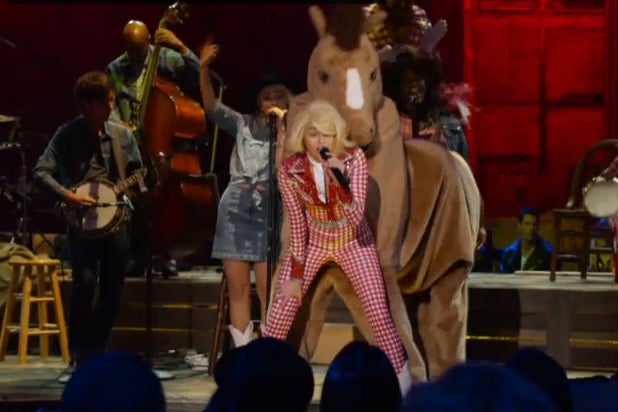 Miley Cyrus belted out her hits live, grinded with Madonna and twerked up on a horse on MTV’s “Unplugged” Wednesday.

It was just like Eric Clapton’s “Unplugged” a couple decades ago.

See video: Miley Cyrus on ‘Unplugged': Madonna and I Have Same Message – Don’t Be Afraid of Sexuality

Cyrus also did some crotch grabs and held her little person backup dancer by the ponytail while singing and dancing.

Cyrus twanged everything up in the special, which was filmed in California. “I tried to bring Nashville here for the night,” she told the coastal crowd.

Cyrus opened her set with “4×4,” decked out in rhinestones and a blonde bob wig under a cowboy hat. Two costumed people in a horse outfit joined her on stage, and ended up on the receiving end of both twerking and straight-up humping.

Madonna joined Cyrus on stage for a mashup of “We Can’t Stop” and “Don’t Tell Me.” The pop stars shared the spotlight, along with each others’ lyrics and bodies.

In a featurette released on Tuesday, the former “Hannah Montana” explained that she invited Madge because of their similar messages to mankind: “It doesn’t matter whether you’re gay, straight, whatever — everyone’s trying to figure out what their freedom is,” Cyrus said. “So it’s talking and not being afraid to talk to every different type of human being and make them know that it’s cool to be who you are.”