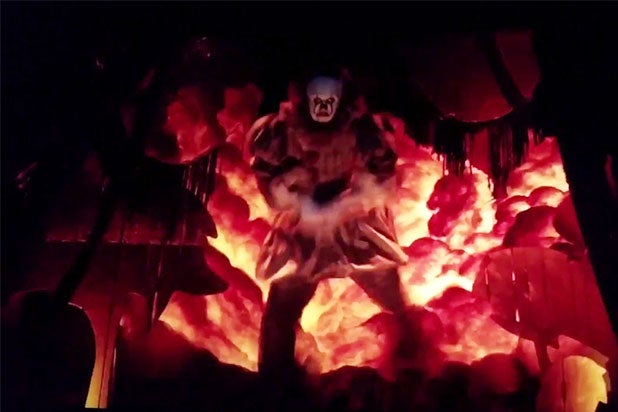 Remember Pennywise’s creepy dancing scene down in the sewers from “It?” Well, imagine that scene playing to your favorite songs like A-ha’s 1984 hit “Take on Me” andOutKast’s “Hey Ya!”

That’s exactly what some genius did on Twitter — making Pennywise dance to a variety of different songs, including “Everytime We Touch,” “The Macarena,” “Shake it Off,” “I’m Blue” and “Barbie Girl.” The social media guru even matched “Can You Feel the Love Tonight?” … just slowed down a tiny bit.

In Andy Muschietti’s film adaptation — which just became the highest grossing horror movie ever — Pennywise (Bill Skarsgard) performs a dance routine for Beverly (Sophia Lillis), whom he has taken down the sewers

Also Read: What Would Pennywise Have to Say to Make You Come Down in the Sewer? Twitter Answers

Social media has had field days with “It” — just last week, one Twitter user, who goes by Pennydook Shipper, started circulating a meme with a still from the hit horror movie showing the spooky clown peeking out from the beyond a rain gutter with the caption: “What would Pennywise have to say to get you to go down there with him?”

The tweet took off, becoming a viral Twitter Moment in the process, as people were chiming in with what would get them to risk it all and hop in the sewers with a murderous clown who lures children to its lair.

“It” has broken various records since its release on Sept. 8 and has since grossed $236 million domestically.

See some of the best dancing videos below, and check out more here.